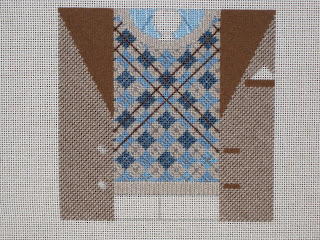 Nigel's tweed jacket is all finished! I was surprised to find I'd used very little thread for the skip-tent stitches in Felicity's Garden "Truffle" and "Fawn." A 40-yard skein seems to go a long way!

I still need to decide how to work the buttons: with real buttons sewn on, as I did for Neville, or to stitch them.

To reward myself, I resumed work on the sweater. All the "Sky Blue" diamonds have been stitched and I'm close to finishing the "Blueberry" diamonds, too.

So now the plan of attack is to finish the sweater and give poor Nigel some trousers!
Posted by Anne Stradal at 6:04 AM 3 comments:

Half a coat is better than none 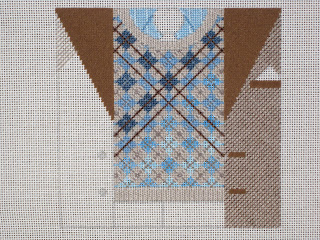 At least Nigel's left side is a lot warmer now!

I started work on the body of Nigel's tweed jacket, using two shades of Felicity's Garden--"Truffle" used in the sweater and "Fawn."

The tweed look is achieved with a skip-tent stitch, in which you work rows of tent stitches on every other canvas thread with one color, then come back and fill in the missed stitches with the other color. In the top left of the photo, I've begun stitching the "Truffle" in diagonal rows on the warp (vertical) threads of the canvas. The completed jacket on the right shows the weft (horizontal) canvas threads stitched with the "Fawn."

I then went back with the Petite Very Velvet used on the lapels to work the top of the pocket and button holes in slanted gobelin stitch. I'll continue work on the jacket in the evenings while I paint again by day!
Posted by Anne Stradal at 6:18 AM 3 comments: 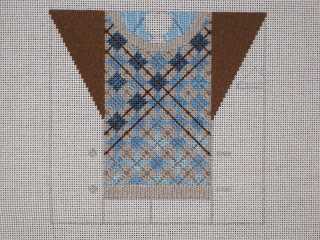 I was making good progress on Nigel's Argyle sweater when it occurred to me that I had several other areas with a lot of brown in them yet to stitch. So, for now, I've left the sweater half-done and moved on!

Instead I worked on Nigel's jacket lapels, using Petite Very Velvet V648 in basketweave. So far, so good.

There's still a lot of jacket left to stitch, so I'll try to keep my needle away from the sweater and concentrate on getting at least half of the coat done!
Posted by Anne Stradal at 6:16 AM 1 comment:

Working from the neck down 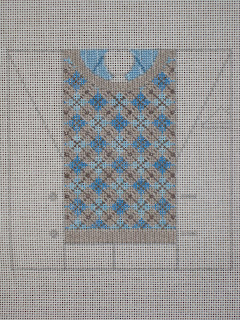 Work on the "Nigel" canvas began with his shirt, a tone-on-tone stripe pattern. Using three plies of DMC floss #827, I stitched rows of basketweave four threads wide alternating with a single row of stem stitch. The shadow was worked in tent stitch with DMC floss #813.

For Nigel's sweater, I used Felicity's Garden "Truffle," a light-weight silk/wool blend. The ribbing at the collar and hem were worked in Kalem stitch, while the rest of the tan background was stitched in basketweave.

With this much accomplished, I can now start filling in the blue diamonds of his Argyle sweater. At least Nigel is a little warmer now!
Posted by Anne Stradal at 5:53 AM 2 comments: 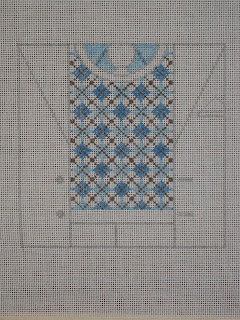 Those of you who subscribe to Needlepoint Now magazine, and who have received your copy of the September/October 2011 issue, may have already met "Neville." He's the faceless but dapper model of my "Savile Row" design that I used to show how easy it can be to replicate fabrics and patterns in needlepoint.

Neville was so much fun to stitch, I decided to work up another design highlighting traditional menswear fashions.
Unlike Neville, however, who measured in at 11 inches square, his little brother--Nigel--is only five inches square and fits in the top of a Sudberry House "Betsy" box. I can't think of a more stylish way to organize all that loose pocket change spilling over the top of a man's dresser!

Nigel is a combination of a stitch-painted canvas and a line drawing: a lot of the pattern will be stitched into the open areas. I'm looking forward to stitching this project and hope you'll stop by to check on my progress!
Posted by Anne Stradal at 6:08 AM 4 comments:

Tucked away for safe-keeping 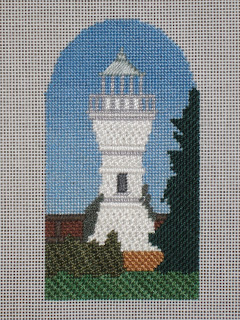 With all the surrounding foliage in place, the Port Pontchartrain lighthouse is finished.

Since my last post, I worked on the wall behind the lighthouse using two shades of brown Burmilana. The top, bottom and vertical members were worked with two strands in a slanted gobelin stitch. To make the wall bricks less prominent than the bricks at the base of the lighthouse, I used only one strand of Burmilana in a diagonal oblong cross stitch with the canvas turned 90 degrees.

For the tree on the right, I used Impressions #5060 in a diagonal oblong cross stitch with the canvas in an upright orientation. I wanted just a little dimension for the vines growing on either side of the tower. One strand and one wrap of Impressions "Moss" gave me just the tiny little French knots I was looking for.

I'm pleased with the way the various shades of green blend with the blue of the sky. It may be shaped like a dumbbell, but I think Port Pontchartrain is still an attractive lighthouse!
Posted by Anne Stradal at 5:48 AM 4 comments: 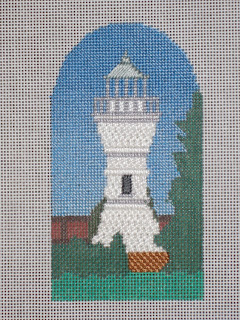 You've heard the expression, "If it ain't broke, don't fix it"? When it came to stitching the sky for the Port Pontchartrain lighthouse, I just couldn't leave well enough alone!

The photo I used to adapt the lighthouse to needlepoint showed a stunning sky--one I thought would be fun to try to duplicate. At the top was an intense blue, which highlighted the oxidized roof perfectly. The darker blue quickly transitioned to a medium blue, which stayed fairly constant in value until it lightened at the horizon.

I also wanted this lighthouse to really stand out against the sky, and had already helped it along by stitching it in DMC #5 perle cotton. To accentuate its profile even more, I decided to "ply down" the floss in the basketweave background from four plies to three.

I found that three plies covered the painted canvas adequately--I'd duplicated the look of the photo pretty closely and the lighthouse definitely does "pop"!
Posted by Anne Stradal at 6:32 AM 5 comments:

Working on the tower 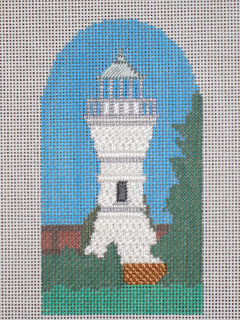 With so much white in the tower of the Port Pontchartrain lighthouse, I began stitching it first before attacking the sky.

The brick tower is painted white, giving it more of a stucco appearance. So for the main part of the tower, I used a Nobuko stitch worked in DMC #5 perle cotton. The windows of the lantern room, gallery around it, and shading were stitched with DMC #5 perle cotton #415. The window is a cashmere stitch using DMC floss #413.

The brick base of the tower is not painted, so I used DMC #5 perle cotton #436 in an oblong cross stitch over two threads, turning my canvas 90 degrees. For the roof, I used a full six plies of DMC floss #927 in a satin stitch so its profile would match that of the areas done in perle cotton.

Next up: stitching the sky!
Posted by Anne Stradal at 6:17 AM 4 comments:

The oddest lighthouse yet 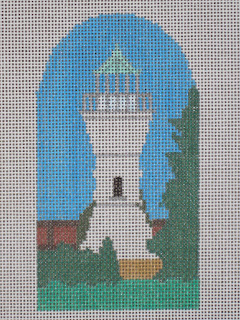 Adapting lighthouses to needlepoint has been as much of a hobby as it has been a business for me in the last 15 years. With today's entry, I've reached my personal goal of developing a representative for each of the 31 states in the U.S. which have lighthouses. If there were a contest, Louisiana's representative, Port Pontchartrain, would easily win as the most oddly-shaped lighthouse I've ever adapted. But as I researched the lighthouses of this state, I was more impressed by the fact that this one was among a handful to survive Hurricane Katrina in 2005 than I was by its shape.

In the early 1800s, Alexander Milne, a young gardener at a Scottish castle, was ordered to cut his hair and don a powdered wig, the fashion of the day. Instead he emigrated to the U.S., settling in New Orleans where he became a successful businessman and land-owner. On one parcel of land along the shore of Lake Pontchartrain, he developed Milneburg, a resort town which became so popular in summer months that a railroad was built to connect it to the French Quarter.

The crude light built by the railroad as a navigational aid was replaced by an octagonal wooden tower in 1837. It, too, was abandoned when a replacement brick tower was completed in 1855. Reportedly this lighthouse was the only one on the Gulf Coast to retain its keeper during the Civil War.

It wasn't until 1880 that Port Pontchartrain lighthouse took on the dumbbell shape we see today. To accommodate a new lantern room, the top of the original tower was expanded with additional brickwork and its height raised by seven feet. When the Levee Board began reclaiming the lakefront in the early 1930s, much of Milneburg was destroyed. But the lighthouse was a survivor: it served as office space when the Pontchartrain Beach amusement park was developed in 1939.

Once considered the south's largest thrill park, its popularity was eclipsed by others and forced to close in 1984. It wasn't until 1991 that the land was acquired from the Levee District by the University of New Orleans as part of a Research and Technology park. Today the lighthouse, which was once located 2,100 feet offshore, now stands on dry ground.

It will be a bit of a challenge to stitch this lighthouse, making it look as attractive as I can while retaining the authenticity of its appearance, but I'll give it my best shot!
Posted by Anne Stradal at 3:57 AM No comments: 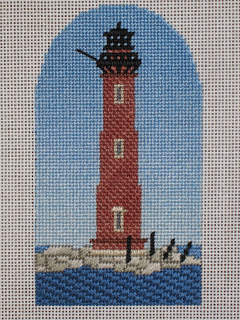 With the few details at its base completed, Sand Island lighthouse is finished!

You may recall that for the little glimpses of water at the horizon, I used DMC floss #322 in a horizontal interlocking gobelin stitch. For the water in the foreground, I switched to DMC floss #312--one shade darker--to give the canvas a little more depth. This area is worked in a diagonal cashmere stitch which gives the illusion of movement to the water.

The granite blocks which stabilize the eroding island were worked in a satin stitch using DMC floss #647 and 648. Lastly, I added the pilings with DMC #5 perle cotton #310 in tent stitches. 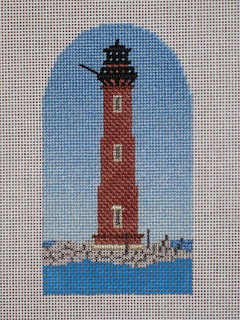 Those of you who followed my stitching on the Baltimore row/alley house may be having a case of deja vue right now--don't those bricks in the Sand Island lighthouse tower look familiar?

I used the same thread and stitch for both projects: Sheep's Silk "Lingonberry" in an oblong cross stitch over two threads, with the canvas turned 90 degrees. The oblong cross stitch creates a higher profile than the normal brick stitch, making the tower stand out more from the basketweave background.

I honestly don't know what the pole is that projects from the gallery below the lantern room--it was in every photo of the lighthouse that I worked from, so I decided to include it. This was stitched with two plies of DMC floss #310 over the previously worked background. I worked the water behind the lighthouse in a horizontal interlocking gobelin stitch with DMC floss #322.

There's not a lot of stitching left on this piece, so I hope to finish up by the weekend!