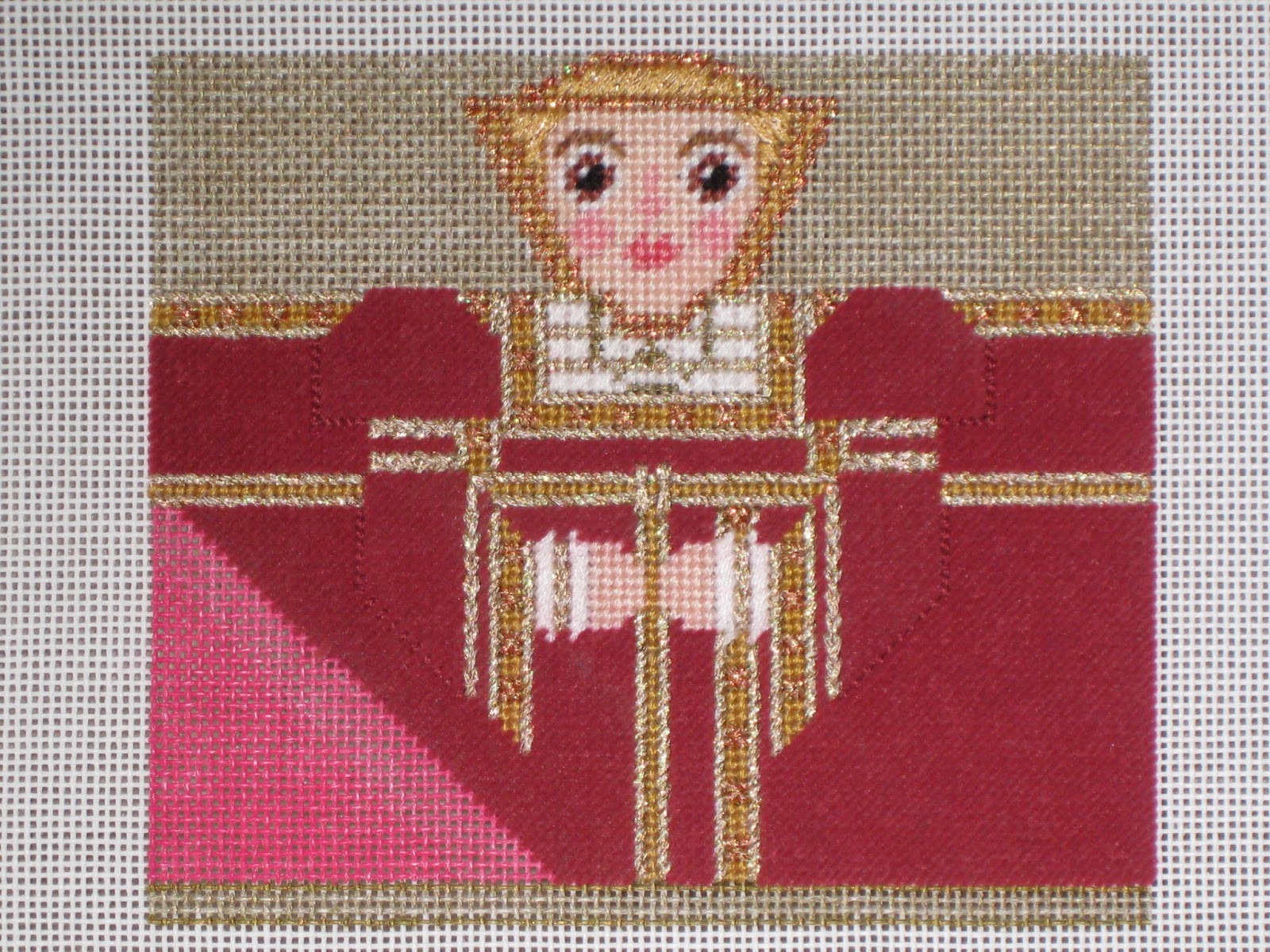 It wasn't bad enough that I've only been able to stitch at night, due to painting commitments.  And working under less-than-stellar lighting conditions probably wasn't such a good idea.  Fact of the matter is, Anne of Cleves has suffered a wardrobe malfunction.

I was happily basketweaving away when I noticed a strange diagonal streak on the canvas.  I stopped work, thinking to check again in morning light to see if the streak were still there.  Yup, it was--obviously an irregularity in the way the thread had taken the dye.  So I started frogging, determined to find the spot where the streak began.

To lessen my frustration, I decided to finish the trim on her gown.  The bands over three threads were filled in with tent stitches using three strands of DMC floss #729.  For the bands over four threads, I alternated tent stitches in floss with Smyrna crosses of Kreinik #12 tapestry braid #127.  I'll fill in the trim at the bottom when I've finished with the red velvet.
Posted by Anne Stradal at 6:13 AM 2 comments:

More progress on Anne of Cleves 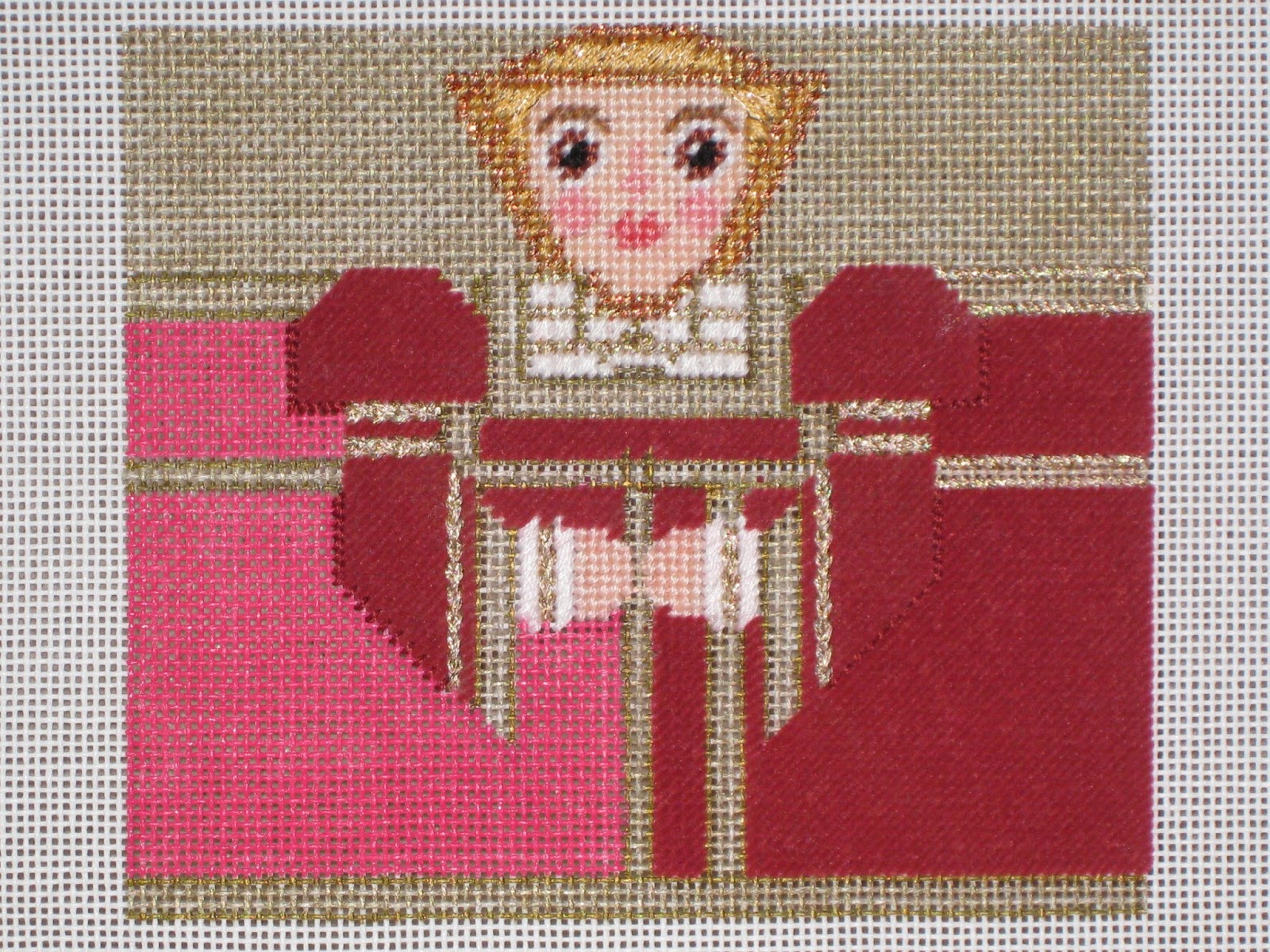 Slow going these days--more painting than stitching--but I've managed to get half of Anne's red velvet gown completed.

In between lengths of red Petite Very Velvet, I've been working on the trim as well:  more braided knitting stitches for her sleeves and stem stitches to define the trim around her neck and waist.

I also did a little work on her headdress, outlining the structured area around her face in tent stitches with a Kreinik metallic that combines gold with a hint of red.  Inside the metallic thread I added gold Silk Lame Braid in slanted Gobelin and tent stitches.  The gauzy veil that falls from this hat will be added later.
Posted by Anne Stradal at 6:08 AM 1 comment:

Anne of Cleves - Progress I 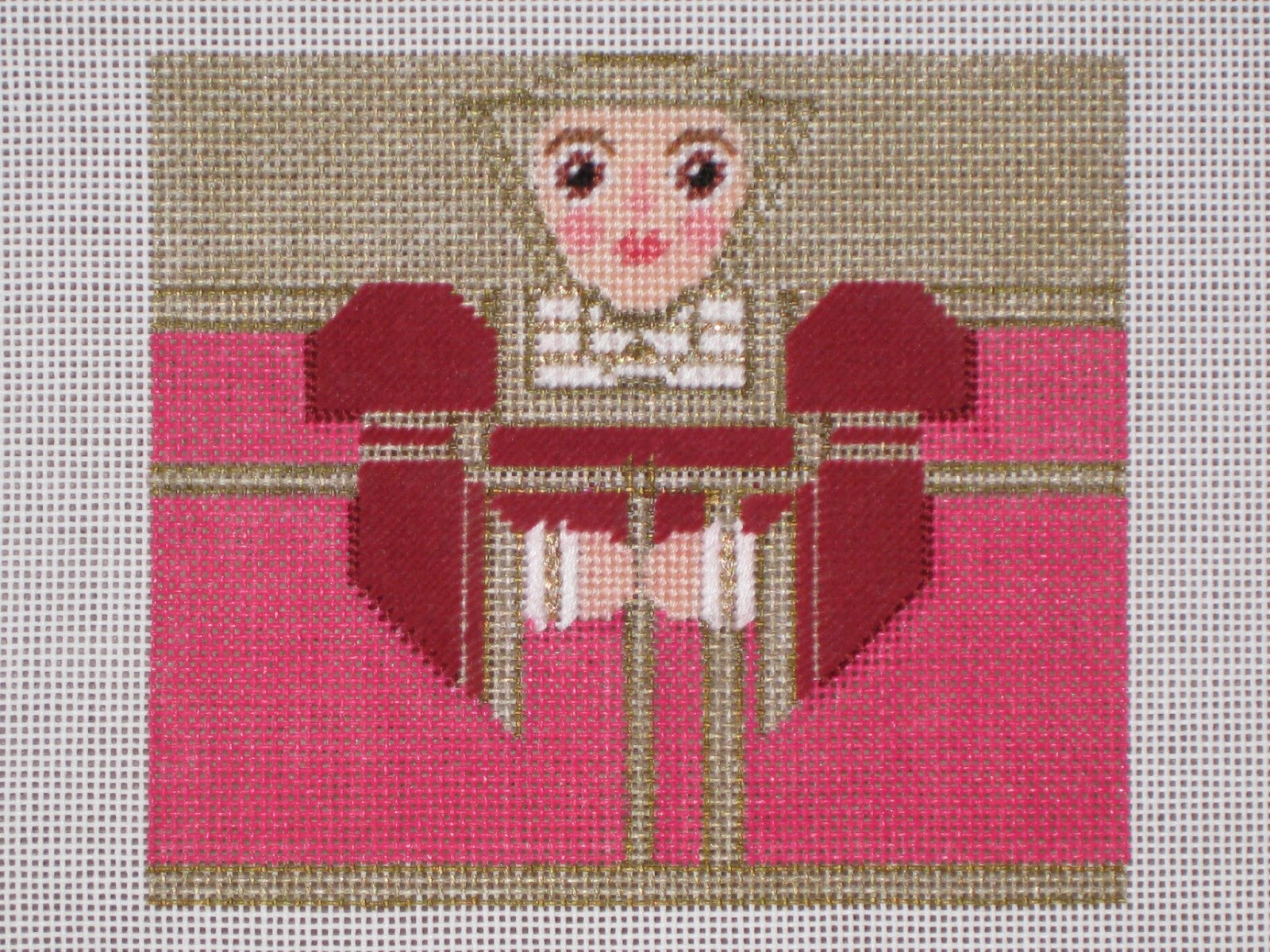 Anne of Cleves' dress, as captured in the Holbein portrait upon which this design is based, has simple lines constructed with sumptuous fabrics:  red velvet trimmed in gold.  For the red velvet, I chose Petite Very Velvet V655, which I'm stitching in basketweave.

The elaborate insert to her bodice was worked in slanted Gobelin stitches with white DMC floss alternating with tent stitches of Kreinik #12 tapestry braid #3221.  More of the same metallic braid was used in braided knitting over one thread to trim the cuffs of her sleeves.

Her face was worked in basketweave with DMC floss and her eyebrows with Burmilana.  The style of her headdress completely obscures her hair.

There's a lot of red velvet and trimming to do, so this is going to take a while!
Posted by Anne Stradal at 6:05 AM 2 comments: 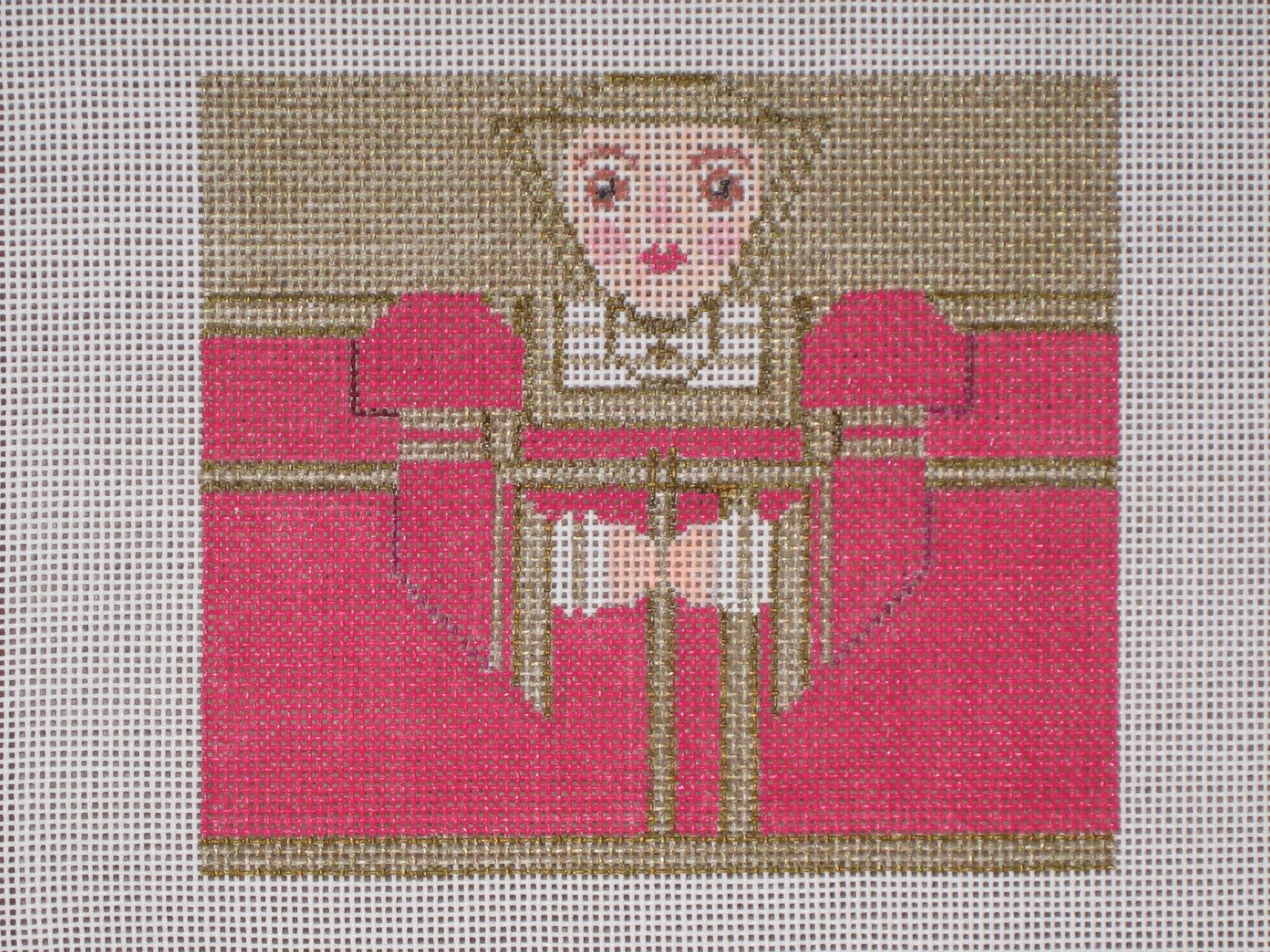 Henry VIII remained wifeless for two years after the death of Jane Seymour.  But the need to secure an alliance with countries supporting reformation and a split from the Catholic Church led him to seek a fourth wife.  His ambassador in selecting a suitable candidate was portrait painter Hans Holbein, who was commissioned to capture likenesses of various noblewomen.

At the German court of the Duke of Cleves, Holbein painted miniatures of the duke's two sisters, Amelia and Anne.  Anne won the beauty contest, and was sent to London for a royal wedding.  Holbein must have used a little "artistic license," however, because Henry didn't find his fiancee the least bit attractive--even calling her a "Flanders mare."  Henry went through with the marriage ceremony but within six months had obtained an annulment.

It was an amicable split, with Anne gaining the new title of "The King's Sister" and several properties, including Hever Castle, former home of Anne Boleyn's parents.  She survived both Henry and his sixth wife, Katherine Parr, and even attended the coronation of Henry's successor, Mary, daughter of Catherine of Aragon.

This adaptation based on  Holbein's portrait sets Anne of Cleves apart from Henry's other wives in one respect:  no black veil!
Posted by Anne Stradal at 6:34 AM 1 comment: 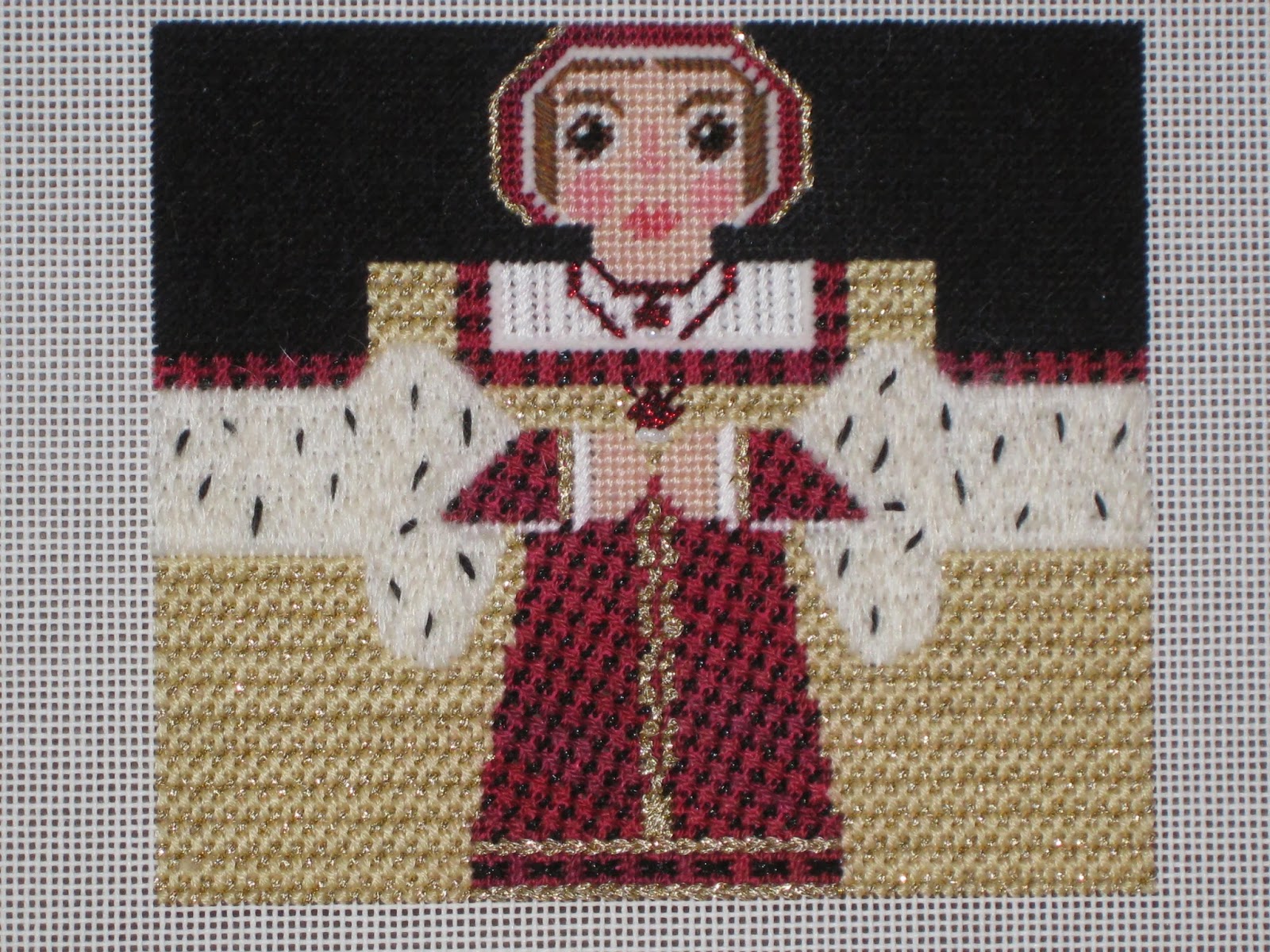 Katherine Parr, sixth wife of Henry VIII, is ready for an appearance at court!

The last step was to add "pearl" drops to her locket and brooch with Mill Hill petite white glass beads.
Posted by Anne Stradal at 6:13 AM 2 comments: 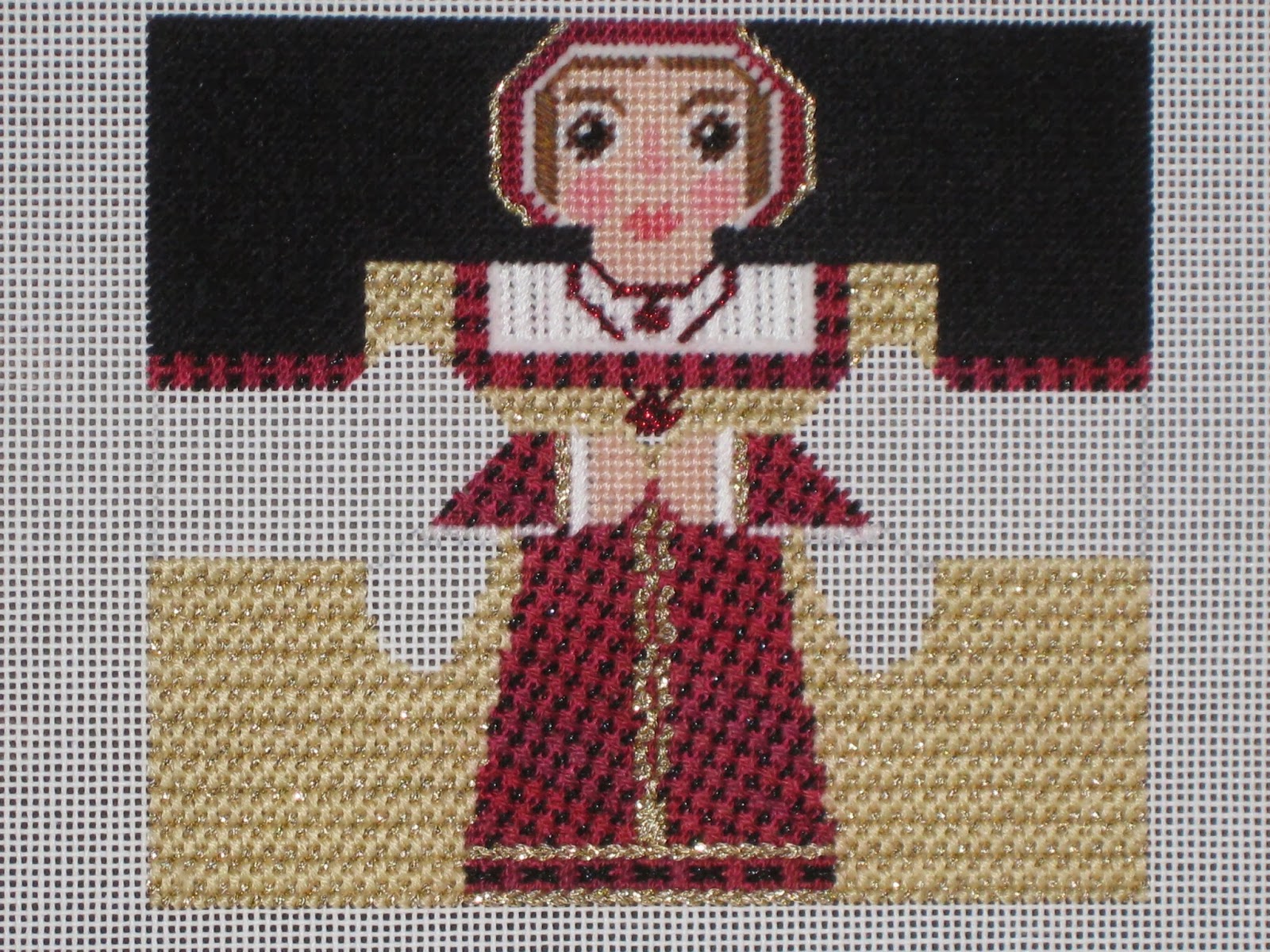 Getting close to the finish line on the Katherine Parr canvas!

The decorative cord hanging down her underskirt from her waist was stitched with Kreinik #12 tapestry braid #002 in a combination of vertical oblong cross stitches and French knots with a Scotch stitch variation at the bottom.

I've auditioned threads and stitches with which to work her stole--now it's time to actually do it!
Posted by Anne Stradal at 7:06 AM 1 comment: 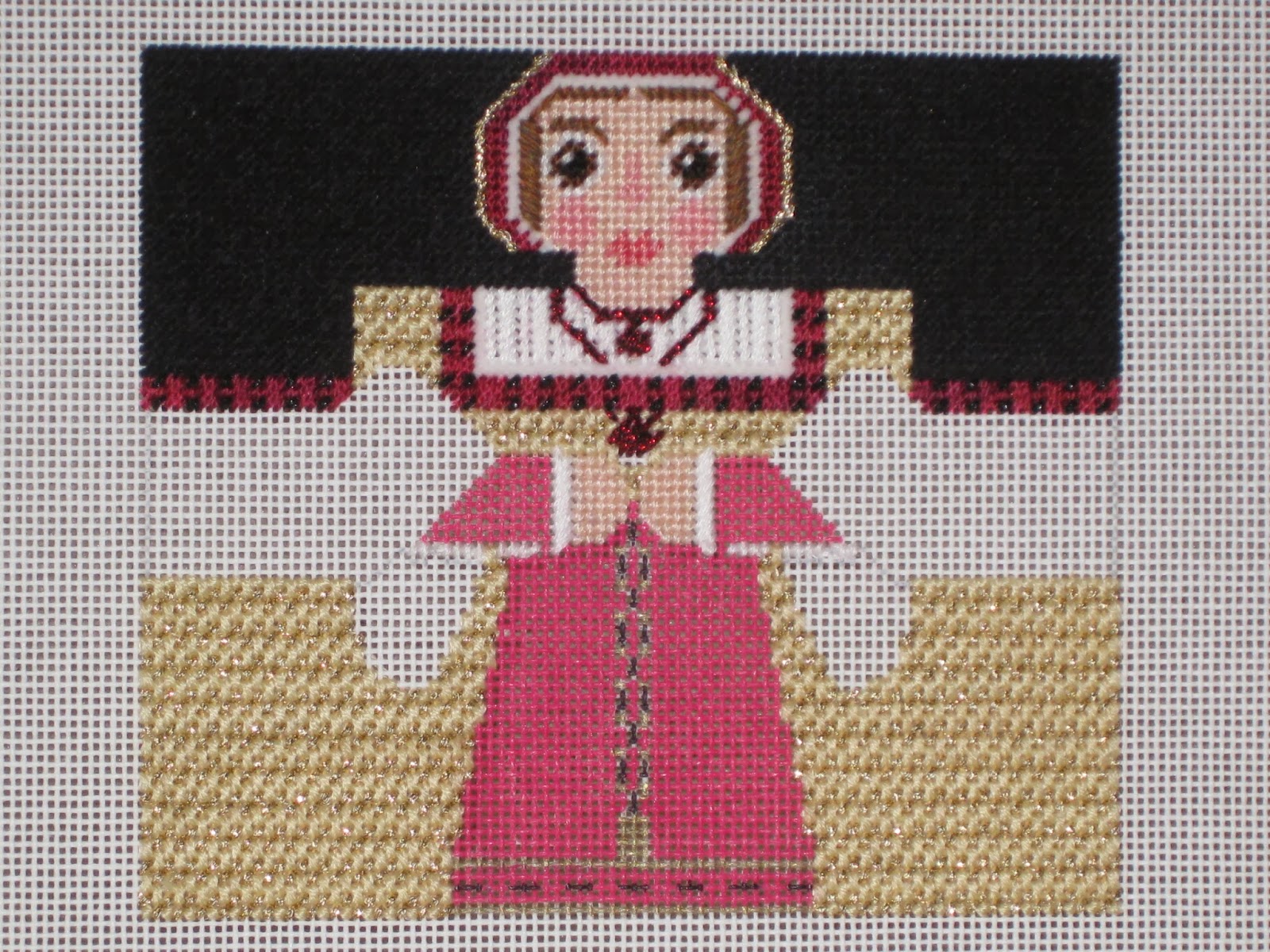 I've been painting more and stitching less these days, so it's taken a bit to get Katherine Parr's overdress finished.

After completing the first pass of the double stitch with three strands of DMC floss #677, I filled in the skipped canvas threads with a tent stitch using Kreinik #12 tapestry braid #002.

To celebrate, I worked her necklace and brooch in tent and satin stitches with Kreinik #12 tapestry braid #061.  On to her sleeves and underskirt!
Posted by Anne Stradal at 5:46 AM 1 comment: 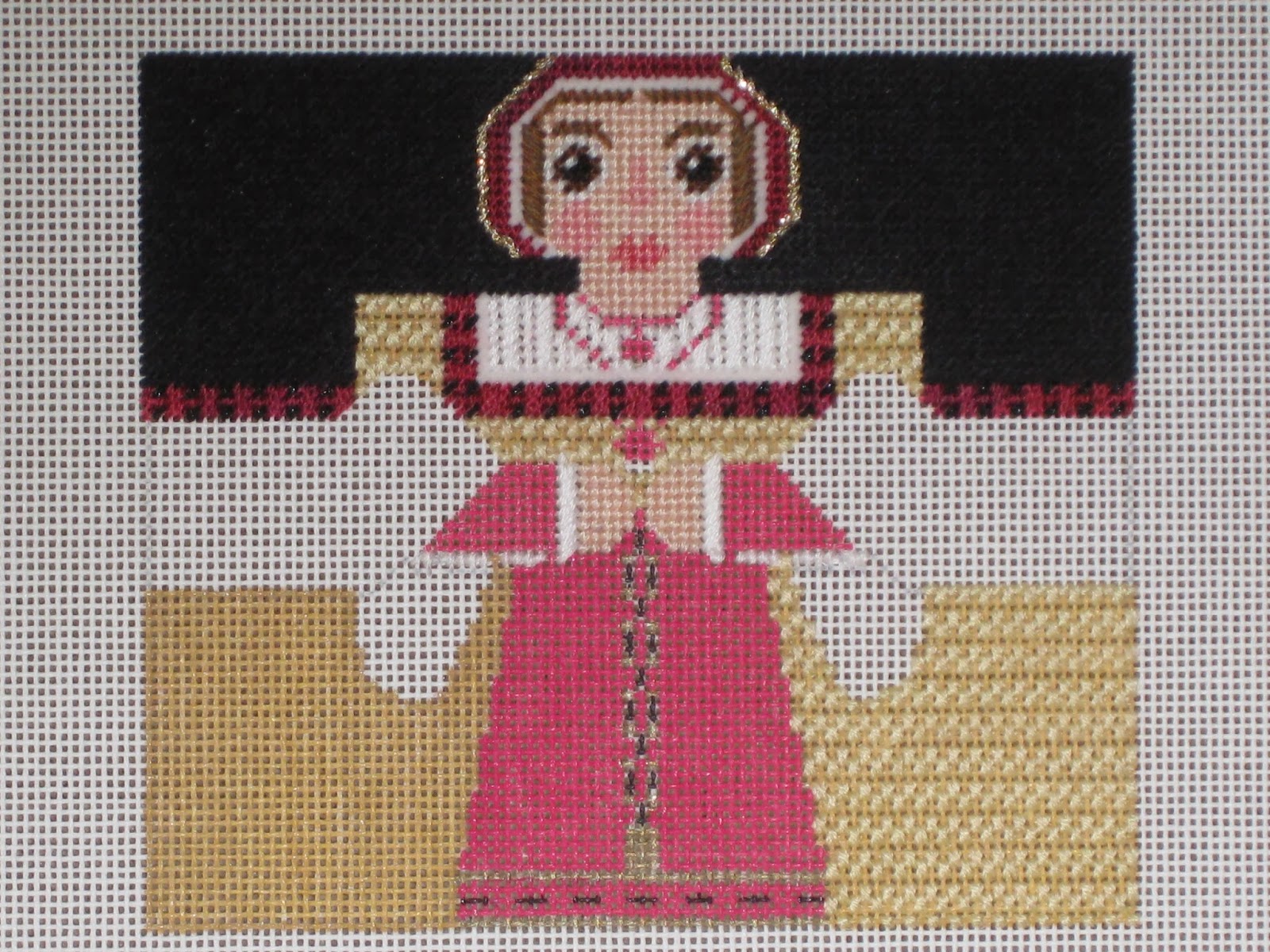 The bodice of Katherine Parr's dress features a white insert, first outlined with a single row of white Petite Very Velvet to give it a raised look, then filled in with alternating rows of stem and slanted Gobelin stitches over two threads using white DMC floss.

The border around the insert was worked in Wildflowers "Cinnabar" with a combination of tent and Scotch stitch variations.  The skipped canvas threads were filled in with Kreinik #12 tapestry braid #005HL.

The overdress in Katherine's portrait is a tone-on-tone gold fabric.  The area to be stitched here is much too small to replicate the pattern, but it is possible to achieve an overall tone-on-tone effect.  I've begun work on the first part of a double stitch--essentially oblong cross stitches over two threads-- using three strands of DMC floss #677..
Posted by Anne Stradal at 6:41 AM 1 comment: