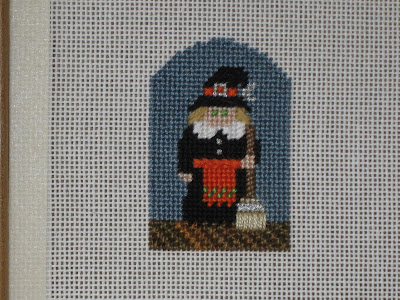 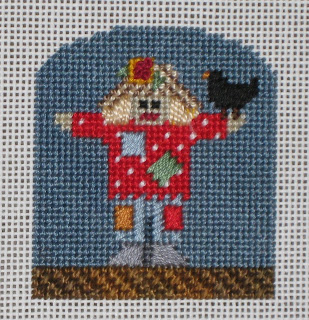 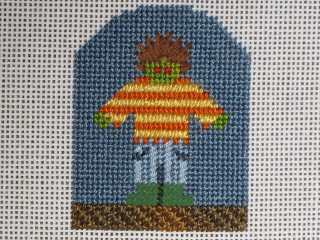 The three tiny trick-or-treaters who accompanied the Haunted House canvas by Painted Pony Designs are ready to be made into stand-ups!

The witch sports a hat of black Petite Very Velvet trimmed with Kreinik #12 braid 001.  The rest of her costume was stitched in DMC floss and her broom in DMC pearl cotton.

The scarecrow was also worked in DMC floss, with a hat and hair stitched in pearl cotton.

The monster was given spiky hair worked in a satin stitch with vintage Medici wool.  His striped shirt was stitched in Vineyard Silk Classic Citron and Tangerine and his boots were worked in green Petite Very Velvet.

Cute little guys, aren't they?
Posted by Anne Stradal at 5:54 AM 1 comment:

All it took was one skein of DMC floss to finish the clapboards of the Haunted House, and the whole thing was completed!  Prior to that, I had stitched the last of the motifs at the foundation.  From right to left:  The cat, worked in black Fuzzy Stuff with green Kreinik eyes.  Next, the cauldron, with a plume of steam created by white Flair in a Satin stitch.  (I removed the silver metallic core before stitching).  The flames were worked with Kreinik braid in an encroaching Gobelin stitch, with individual tent stitches for "embers."  I divided the area below the cauldron into logs, stitched with Burmilana, and ashes stitched with Impressions.  The spindly tree was formed by Silken Straw Whiskey in stem stitches.
The bag of candy was worked with DMC #5 pearl cotton in an encroaching Gobelin stitch, with DMC floss creating the candy in individual tent stitches and the "C" in a satin stitch.
The crescent moon and star at the top of the eave were worked in an encroaching Gobelin stitch with Silk Lame Braid for 18 ct. and hung from Kreinik braid 005 HL worked in stem stitches.
With the house itself completed, all that remains to be stitched are the little trick-or-treater canvases that came with the house, which hopefully won't take too long to work up. 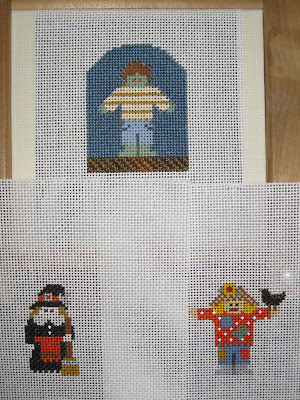 Talk about best-laid plans!  I had all but the top of the last quarter-panel to stitch on the Haunted House when I ran out of DMC floss to work the clapboards.  I need to visit my LNS later this week to pick up threads for another project, so the floss will be at the top of my shopping list!

Not to waste time, I turned to the three canvases which had come with the Haunted House:  three little trick-or-treaters only two inches high.  To finish them as stand-ups around the Haunted House, I first needed to give them a background.

Starting with the little monster, I measured the figure, adding five canvas threads top and bottom and four on each side, and drew the outline on graph paper.  When the outline was transferred to the canvas, I "grounded" the figure with Watercolours Copper, the same thread I'd used for the bottom of the Haunted House, using a diagonal mosaic stitch.  The rest of the background was filled with DMC floss 931 in basketweave to simulate a night sky.  There's not a lot of room for decorative stitches on these little people!
Posted by Anne Stradal at 6:02 AM 1 comment: