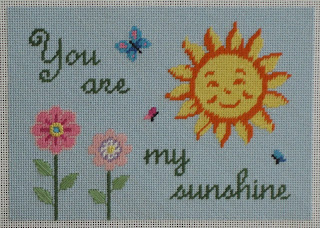 This time of year, it's easy to get pulled in any number of different directions, and stitching often takes a back seat.  But I did finally complete the little door hanger, and I'm happy with the overall effect.

The same Vineyard Silk Classic Foliage that formed the lettering was used in a stem stitch for the flower stems, with VSC Sage for leaves in a satin stitch.

The main portion of the hot pink flower was worked in an encroaching Gobelin stitch with VSC Cherry Tree, outlined in tent stitches with Peppermint and accented with stem and long stitches with Burmilana.  The center was worked in a Leviathan stitch variation with VSC Jewel surrounded by French knots of VSC Creme Brulee.  More Peppermint was used in an encroaching Gobelin stitch for the other flower, with tent stitches of VSC Dream and Bright White and French knot flowers of Creme Brulee in the center.

Thje butterflies were worked in encroaching Gobelin, satin and tent stitches with VSC Jewel, Celestial, Cherry Tree, Jet Black and bright pink Burmilana.  I need to pick up some lace trim from the local fabric store before sending this project off for finishing.
Posted by Anne Stradal at 7:40 AM No comments:

The thought that counts 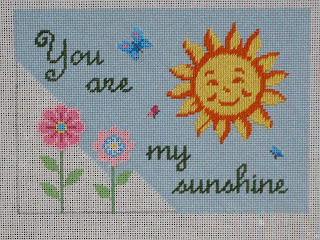 Plowing along on the background, I finally stitched enough to add the lettering in tent stitch with Vineyard Silk Classic Foliage.

I'm hoping to get more accomplished over the long weekend.  Happy Thanksgiving to everyone!
Posted by Anne Stradal at 6:52 AM No comments: 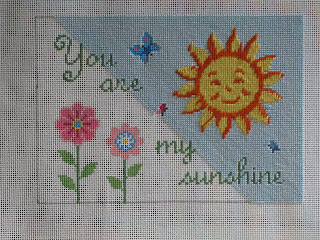 My goal in the last week was to stitch enough background so I'd clear the outside rays of the sun.  With that accomplished, I filled in the rest of the sun with Vineyard Silk Classic Creme Brulee and Nectarine in an encroaching Gobelin stitch.  The facial features were added with tent stitches.

In the next week or so, I hope to complete enough background so I can add some lettering
Posted by Anne Stradal at 10:08 AM No comments: 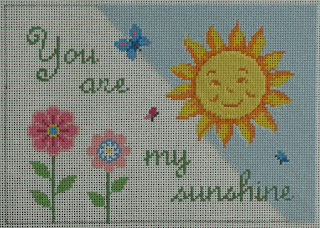 This is just a little piece--about five in. by seven in.--so I wanted to keep the stitching fairly simple.  I started the background in basketweave with four strands of DMC floss 3841.

When the blue became a bit tedious, I treated myself to the center of the sun, working it in an encroaching Gobelin stitch with Vineyard Silk Classic Creme Brulee.

Back to the background for a while!
Posted by Anne Stradal at 10:32 AM No comments:

A little project for a little person 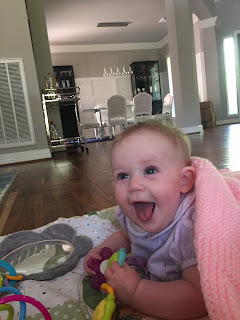 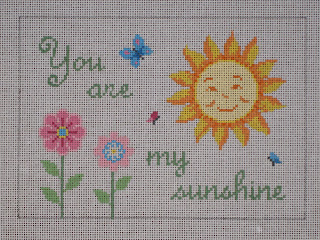 It's nice to have a small project on hand, and it's even nicer to have a new little person in the family.  This little doll is our granddaughter, now six months old.  Our first grandchild, she's the second girl to be born in seven generations of Stradals.

I used to sing "You are my sunshine" to her father, so when I saw this canvas offered on Facebook by Louise's Needlepoint in Powell, Ohio, it seemed to be the perfect choice.  I don't know who's the designer, but I wish it were me!  It's beautifully painted, that much I can tell you.

I'll be working on this canvas in between another, bigger project for a nice change of pace, and will be back when I have something to show for myself!
Posted by Anne Stradal at 10:31 AM 1 comment: 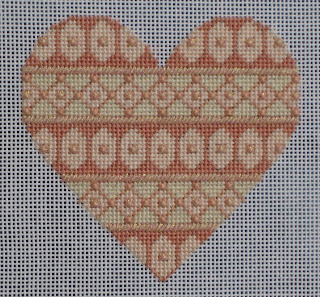 Stitching these little hearts is a lot like eating potato chips--you can't be satisfied with just one.

For my third heart, I chose a horizontal band design, "lifting" a couple of motifs from one of my Eggs for All Seasons.  I used peach tones of DMC floss--948, 754 and 758--that I'm more accustomed to using for skin tones, and combined them with DMC 712, an off-white, and Kreinik #12 braid 9192.  The stitching was kept simple:  basketweave and Smyrna crosses.

I could go on and on, filling in heart shapes with an almost infinite combination of designs and colors, but for now I think it best to get back to work!
Posted by Anne Stradal at 4:36 PM 1 comment: 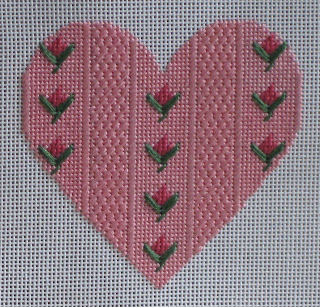 Stitching another heart for Greater Kansas City's Hearts for Hospice project, I chose pink, one of my favorite colors.

The background alternates floral stripes with panels of Nobuko stitch, separated by thin stripes of slanted Gobelin stitch, all using four strands of DMC floss 3326.  The rosebuds were worked in an encroaching Gobelin stitch with DMC floss 335, while the leaves were formed with satin stitches of DMC 367.

It's a pretty simple design, really, but pleasing to my eyes at least.  Hmmm....do I have time for just one more?  Stay tuned!
Posted by Anne Stradal at 8:48 AM 1 comment: 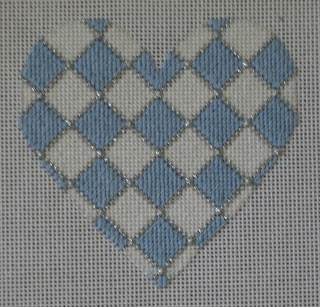 Finding a little downtime between projects, I decided to do something for someone else for a change.  The Greater Kansas City Needlepoint Guild was seeking contributions to its Hearts for Hospice program, so this filled my window of time perfectly.

I found a heart template online, traced it onto graph paper, then played around with a suitable design for the center.  After transferring the design to some scrap canvas, I raided my stash for the threads you see here.

The whole project from start to finish took about four days, and I had such a warm, fuzzy feeling when it was completed that I decided to do another one!  I'll show this one, too, when I'm done.
Posted by Anne Stradal at 8:20 AM 1 comment:

When Rebecca Wood's mini banner Winter was posted on Needlepoint Nation Stash Exchange some time ago, it was love at first sight for me.  Everything about it appealed:  the serenity of the scene, the warmth exuded from the lighted windows of the house, and the delicious blue-green with which it was painted.  Because of its size--half of it mounted on stretcher bars and the rest rolled up with clips--it became my traveling companion.  But I also had other canvases to stitch, so it's taken longer than normal to reach a TADA moment.

I decided to stitch all the background (except for the sky, done in basketweave) in an encroaching Gobelin stitch, with other design elements worked in a variety of decorative stitches to make them pop.  Why encroaching Gobelin?  It's a smooth stitch that's ideal for blending one shade into another and which supports the theme of serenity.

Some folks give encroaching Gobelin a bad rap.  I had one person email me, saying she wanted to stitch a canvas I'd featured in a "Making It Simple" column in Needlepoint Now, but was looking for an alternative to encroaching Gobelin.  "It's a nasty stitch--I hate it and will never, ever do it," she added.  Wow--strong stuff!  I've found this stitch works up more easily if done on the diagonal--it makes it simpler for me, anyway, to see where the needle should nestle the thread inside the previous stitch.  Every time I do this stitch, I think back to when, as a kid, my mother served a dinner of fish.  When I complained that there were bones in the fish, my exasperated mother--a terrific cook--retorted, "That's why God gave you a tongue!"  Well, when it comes to the encroaching Gobelin stitch, that's why needle manufacturers give their product a pointed end.

The lovely blue-greens were provided by three values of Impressions and all the snow by Kreinik #12 tapestry braid 032.  The house was worked in a diagonal oblong cross stitch with #8 pearl cotton and the sled in more pearl cotton.  The red cardinals were stitched in basketweave with red Trio, with their wings added in a padded satin stitch.  The snowman's body was worked in a diagonal mosaic stitch, with a scarf created by red Trio and dark green Impressions in a slanted Gobelin stitch.

The finished canvas just makes me smile, and I hope my daughter-in-law, decorator extraordinaire, will like it, too!
Posted by Anne Stradal at 12:08 PM No comments:

Top of the Mornin! 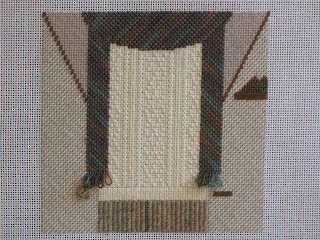 The last two weeks have been hellish on the Cape.  Back-to-back Nor'easters socked us with snow and winds topping 80 m.p.h.  Two power outages later, we're back in business.  Today is St. Patrick's Day, the sun is shining, and all's well with the world!

Liam, that dapper Irish gent from my Savile Row series, and I wish you all a Happy St. Patrick's Day!
Posted by Anne Stradal at 6:26 AM 2 comments: