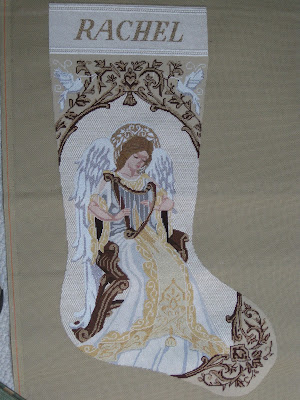 Folks who follow this blog will probably be as relieved as I am to see this day arrive:  the Ivory Angel stocking is finished!

When I marked the area for the cuff, I had added three additional rows to give the finisher more flexibility turning the top over.  I checked with Mary Agnes Rhudy Cussen at Needle Nicely in Vero Beach, Florida, to see how those last few rows shoulld be stitched.  She advised a row of tent stitches abutting the last row to maintain the integrity of the outside slanted Gobelin stitches, so that's what I did.

This is my fourth stocking finish in 18 months--not a feat I care to repeat anytime soon!  But to paraphrase Kermit the Frog in the song The Rainbow Connection, "I did just what I set out to do!"
Posted by Anne Stradal at 8:30 AM 3 comments: 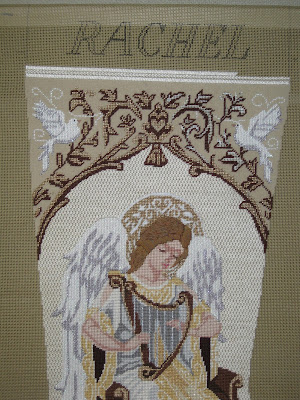 Creative Avoidance is a term I learned from designer Judy Harper.  As it relates to needlepoint, it involves working on absolutely anything and everything except for the project you're supposed to be stitching.  While I've continued to put in a few stitches a day on Ivory Angel, I've also finished two other canvases--smaller and much more colorful than the stocking.

It's partially my own fault--leaving nothing else to be done but filling in the gold of the vine and working on the ivory cuff.  I'd also been dragging my feet about stitching the angel's hair, one of my least favorite things to do.  But she's now completely coiffed, worked with two strands of Burmilana in long/short and satin stitches.  Some "highlights" were added with one strand of vintage DMC Medici wool on top of the previously stitched areas.

I'll finish filling in the vine with Kreinik #12 tapestry braid 002V, then move the canvas on stretcher bars for the final task of working the cuff.
Posted by Anne Stradal at 5:43 AM 2 comments: