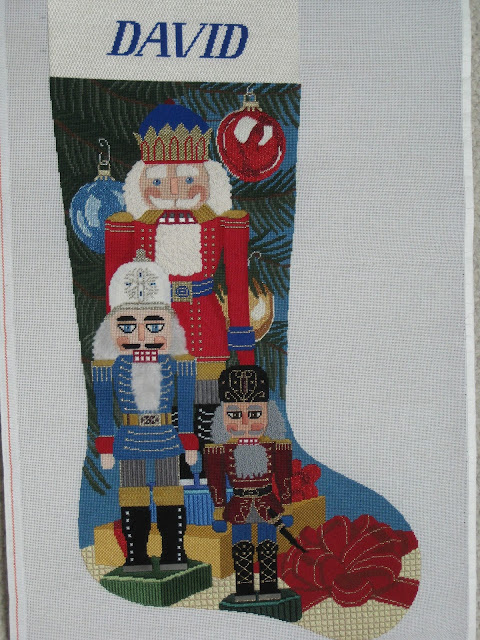 While waiting for the camera/computer snafu to get resolved, I kept stitching on the Nutcracker/Packages stocking--until the recipient of the stocking next year arrived, that is.  Shortly after he left, I pulled the stocking out from its hiding place in my closet and have been stitching ever since!

The smaller package was worked with three values of gold DMC floss in a diagonal oblong cross stitch and trimmed with a bow of Silk Lame Braid in an interlocking Gobelin stitch.  The larger package was worked in Scotch stitches over four threads with ecru Silk Lame Braid.  Its bow was stitched in basketweave with two shades of Petite Very Velvet with highlights created by Kreinik #12 tapestry braid #002V in tent stitches.

I exceeded my goal by squeezing in one more stocking finish for this year and am now waiting patiently for another stocking canvas to arrive that I can tackle in 2016.  Happy New Year to all!
Posted by Anne Stradal at 10:47 AM 3 comments:

Due to technical difficulties....

The camera with the most recent progress photo of the Nutcracker/Packages stocking is refusing to play nicely with the computer!  I've been working on the canvas a little every day, though, and have actually made it to the bottom of the design area in a couple of spots.  Tech support is due in for a visit this weekend, so hopefully I'll have something to show for myself soon.  Stay tuned!
Posted by Anne Stradal at 6:04 AM No comments: The middle nutcracker now has two legs to stand on, stitched in basketweave with black and gray Petite Very Velvet and trimmed with Smyrna crosses of Kreinik #8 fine braid 5760.  The smallest nutcracker's boots are also trimmed, using Kreinik #12 tapestry braid 002V in tent stitches and Smyrna crosses.  The laces were added on top of the stitched areas by stretching the braid between the Smyrna crosses.

Suiting up the little guy 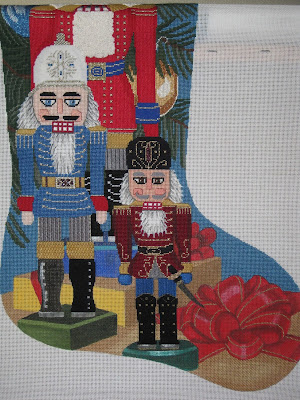 Now that the Nutcracker/Packages stocking canvas has been transferred to stretcher bars, the end is definitely in sight!

I've been concentrating on the smallest nutcracker, who now has a tunic stitched in basketweave with Vineyard Silk Classic Berry and a darker burgundy Burmilana for shading.  It's trimmed with Kreinik #12 tapestry braid 002V in tent stitches and Smyrna crosses.  The cuffs on the sleeves were worked in interlocking/encroaching Gobelin stitches with gold Sheep's Silk.  A royal blue Impressions was worked in a satin stitch for his hands and a Kalem stitch for his trousers.

His boots were stitched with black Petite Very Velvet, covering the painted laces that will be added on top of the worked areas.  Taking advantage of early morning light, I moved to the middle nutcracker, who at least has one leg to stand on so far.
Posted by Anne Stradal at 6:08 AM 1 comment: