Two skies, side by side 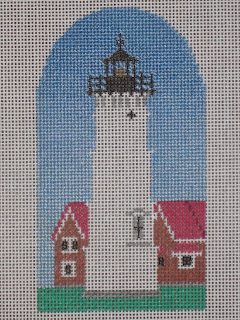 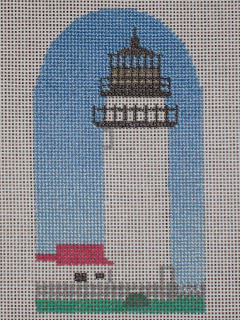 I finished stitching the sky behind Highland lighthouse (left) using the needle-blending technique.  The same four values of blue--DMC floss #3755, 3325, 3841 and 775--that I used for the Nobska lighthouse sky (right) are at work for Highland.  The spacing of the needle-blends is also the same:  12 rows down from the top, followed by eight rows of consecutive blends down to the horizon.  You'd think the two skies would be identical, but they're not.  Why?

When you combine three plies of one value and one ply of another, and let them play out as you basketweave, one of those values will predominate over the other.  This "luck of the draw" produces a slightly tweedy effect, which will change every time you stitch.  The only constant you'll see is when you're stitching with a full four plies of any value.

Posted by Anne Stradal at 5:55 AM No comments:

The second lighthouse that needs to be updated is Cape Cod lighthouse in Truro, Massachusetts, almost at the tip of Cape Cod.  The first of its kind on the Cape, it was also the seventh lighthouse to be built in the country.  Its nickname, Highland Light, is derived from the high ground upon which it was situated.

Truro was founded as "Dangerfield" in 1700 because of the treacherous waters along its coast.  To safeguard mariners, George Washington signed a bill in 1796 approving $5,000 to build a 45-foot wooden, octagonal tower set 500 feet back from the bluffs.  Lit in 1798 and rebuilt in 1831, the structure suffered from deterioration due to wood rot.

In 1857, a new 66-foot tower was completed and fitted with a new first-order Fresnel lens that produced a flashing white light every five seconds.  Three outbuildings were also constructed for the lighthouse keeper and his two assistants.  The lighthouse was automated in 1987.

Like so many other lighthouses, which have fallen prey to erosion, Highland Light was in peril of falling into the Atlantic Ocean.  The clearance from the cliff of 510 feet measured in 1806 had by 1989 dwindled to 128 feet.  After raising $1.5 million, the 430-ton tower was moved in 1996 to a safer distance of 453 feet from the cliff using I-beams greased with Ivory soap.

I'll be needle-blending the sky behind Highland Light, just as I did for Nobska lighthouse. 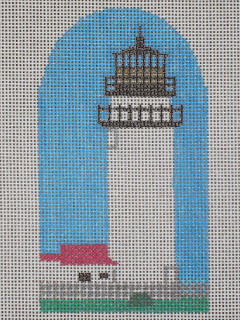 Posted by Anne Stradal at 11:30 AM No comments:

One down, one to go 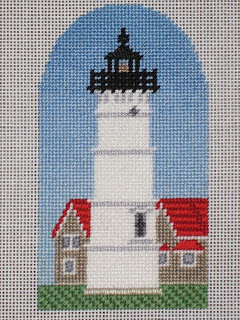 The "new and improved" Nobska lighthouse is finished, with the addition of the keepers' houses and the grass.

Roof shingles were worked in tent, slanted gobelin and satin stitches with DMC floss #817 and #347 for the shadow.  The windows were outlined with white DMC floss and filled in with DMC floss #414 in Scotch or cashmere stitches.

To get just the right shade for the cedar shingles on the sides of the buildings, one of the ANG Cape Cod chapter members, who lives near the lighthouse, made a "drive-by" to check it out.  She reported back that a combination of two plies each of DMC floss #627 and #3782 was the closest match, so that's what you see here!

Another blend, this time of two Burmilana greens, created the grass, using a diagonal mosaic stitch.  It looks like the groundskeeper did a very neat job of mowing, don't you think?
Posted by Anne Stradal at 5:38 AM 1 comment: 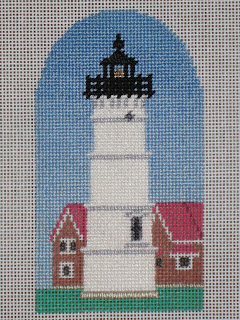 The Nobska lighthouse is stitched now , using DMC #5 perle cotton Blanc for the tower and #310 for the lantern room and gallery below.  The perle cotton gives the structure a slightly higher profile when set against the sky stitched in basketweave with floss.

The tower is clad in cast iron, so I stitched it in basketweave, too, for a smooth look.  The shadow below the rings connecting the cast iron plates was defined by a single row of tent stitches in DMC #5 perle cotton #415.  The base of the lighthouse was worked in slanted gobelin stitches with DMC #5 perle cotton #644.

To further distinguish the railings of the gallery from the base of the lantern room, I added individual tent stitches with DMC floss #3799.

Mary Agnes (www.needlenicely,blogspot.com) had asked if the needle-blending class I'm teaching in September would be open to non-members of the Cape Cod chapter of ANG.  I checked with the program chair, and the class is for members only.

Posted by Anne Stradal at 6:20 AM No comments:

The sky at Nobska Point 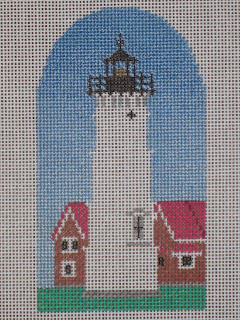 I've begun stitching the updated Nobska lighthouse model a little differently than usual, starting first with the needle-blended sky.  After all, needle-blending is what I'll be teaching in September!  The blue floss is light in color, and I was careful to begin and end my threads far away from the white tower, so I don't anticipate any problems stitching the lighthouse itself.

So far, so good!  Conveniently, this combination of blue values will also work for Cape Cod (Highland) lighthouse, another design offered for the class that needs updating, too.  On to the lighthouse!
Posted by Anne Stradal at 5:48 AM 2 comments: 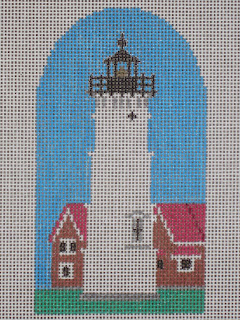 An intensified work schedule has prompted me to rearrange my stitching priorities:  the Toyland Rocking Horse canvas, which I was stitching for myself, must go on the back burner to make way for more immediate deadlines.

In September, I'll be teaching a needle-blending class with the Cape Cod chapter of ANG using a couple of my lighthouse designs.  I needed to widen two of them so all three would be the same size, so surfed the net to properly elongate the buildings adjacent to them.

As I was living in Texas in 2001 when I first designed Nobska lighthouse, I used a photo from a book with a 1998 copyright date.  Flash forward to 2013, when my internet surfing revealed the keepers' quarters had since been resided with cedar shingles.

I'd also stitched the sky for the original model with a jacquard stitch in a solid blue DMC floss.  Had I known then what I know now, I wouldn't have worked the sky that way.  Bottom line:  time to stitch another model, this one  with a more appropriate--and realistic--needle-blended sky.

A Brief History of Nobska lighthouse

Located in Woods Hole, Massachusetts, at the entrance to Vineyard Sound, the original lighthouse was built in 1828.  Its octagonal tower was an integral part of a typical Cape Cod-style house.  Over time, the roof began to leak, and the lighthouse was razed to construct a new 40-foot free-standing tower in 1876.  A second outbuilding was added in 1907 to provide housing for a newly-appointed assistant lighthouse keeper.  The lighthouse was automated in 1985 and the keepers' dwellings are now home to the U.S. Coast Guard regional commander.

I need to write a stitch guide for this "new and improved" lighthouse design, so I'd better stitch it first!
Posted by Anne Stradal at 7:05 AM 3 comments: 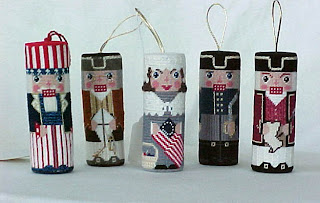 The flag is waving proudly in front of our house this morning to celebrate America's birthday!  Joining me to wish you all a safe and happy celebration are some little people from my Early American series of cylindrical ornaments.

From left to right:  Uncle Sam, Benjamin Franklin, Betsy Ross, George Washington and Thomas Jefferson.
Posted by Anne Stradal at 6:31 AM No comments: