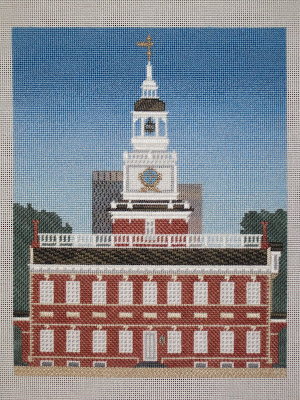 Independence Hall, Philadelphia--the birthplace of The United States of America 240 years ago tomorrow with the signing of the Declaration of Independence.

I designed and stitched this piece four years ago for the July/August 2016 issue of Needlepoint Now to mark the 40th anniversary of the American Needlepoint Guild (ANG).  ANG's anniversary celebration took place during its annual seminar in Philadelphia.

The sky behind Independence Hall is definitely the largest area I've ever needle-blended!
Posted by Anne Stradal at 11:16 AM 1 comment: