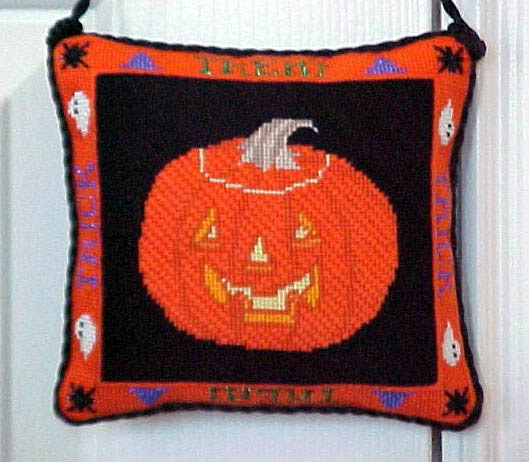 Happy Jack and I just wanted to wish everyone a boo-tiful day!  Jack is a door hanger--the first Halloween design I created--worked in DMC cotton floss, Kreinik metallics, and black Petite Very Velvet.
Posted by Anne Stradal at 6:10 AM 1 comment: 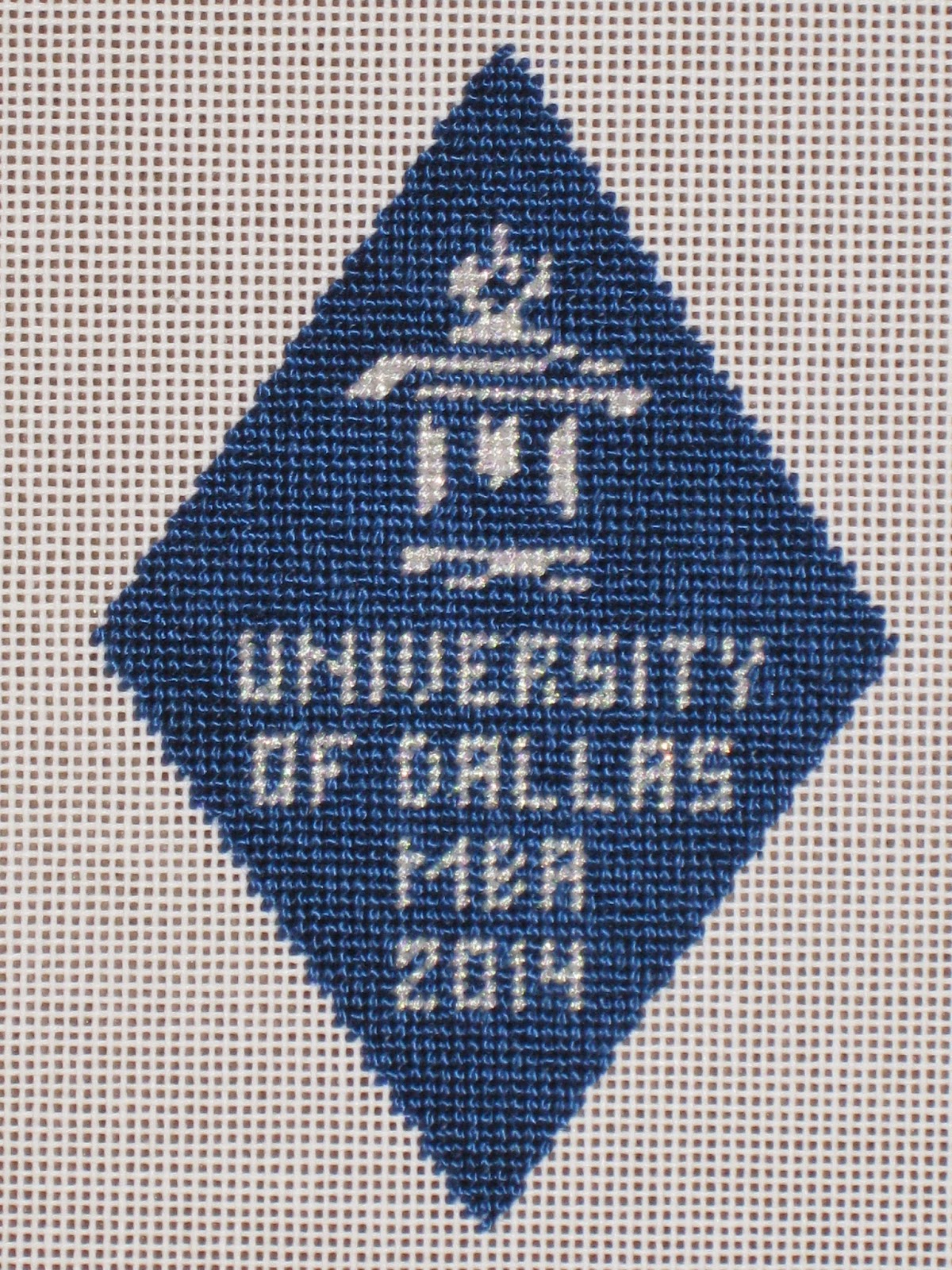 Earlier this year, our youngest son completed his graduate studies, a not-so-easy feat since he'd been holding down a full time job while attending school.  This proud Mama wanted to commemorate the event with an ornament, just as I'd done for both sons when they received their bachelor's degrees.

This time I decided to wing it and create a one-of-a-kind ornament.  Scouring the university website for the school logo and colors, I then sat down with graph paper and charted this design.

It's stitched with DMC #5 perle cotton 311 and Kreinik #12 tapestry braid 032 from my stash.  The whole process from graph paper to finished ornament took only a few days--a very good thing!
Posted by Anne Stradal at 5:30 AM 2 comments:


A gazillion French knots later, the lamb--and Fleece Fairy--are finished!  Here are the "before" and "after" photos, so you can see more clearly what I changed from the original design.  Nothing substantial was altered--just a little tweaking here and there.  The major addition was the background behind the lamb to make the finisher's job easier, and I'm really glad I did that because I think it adds some dimension to the canvas and makes the lamb more prominent. 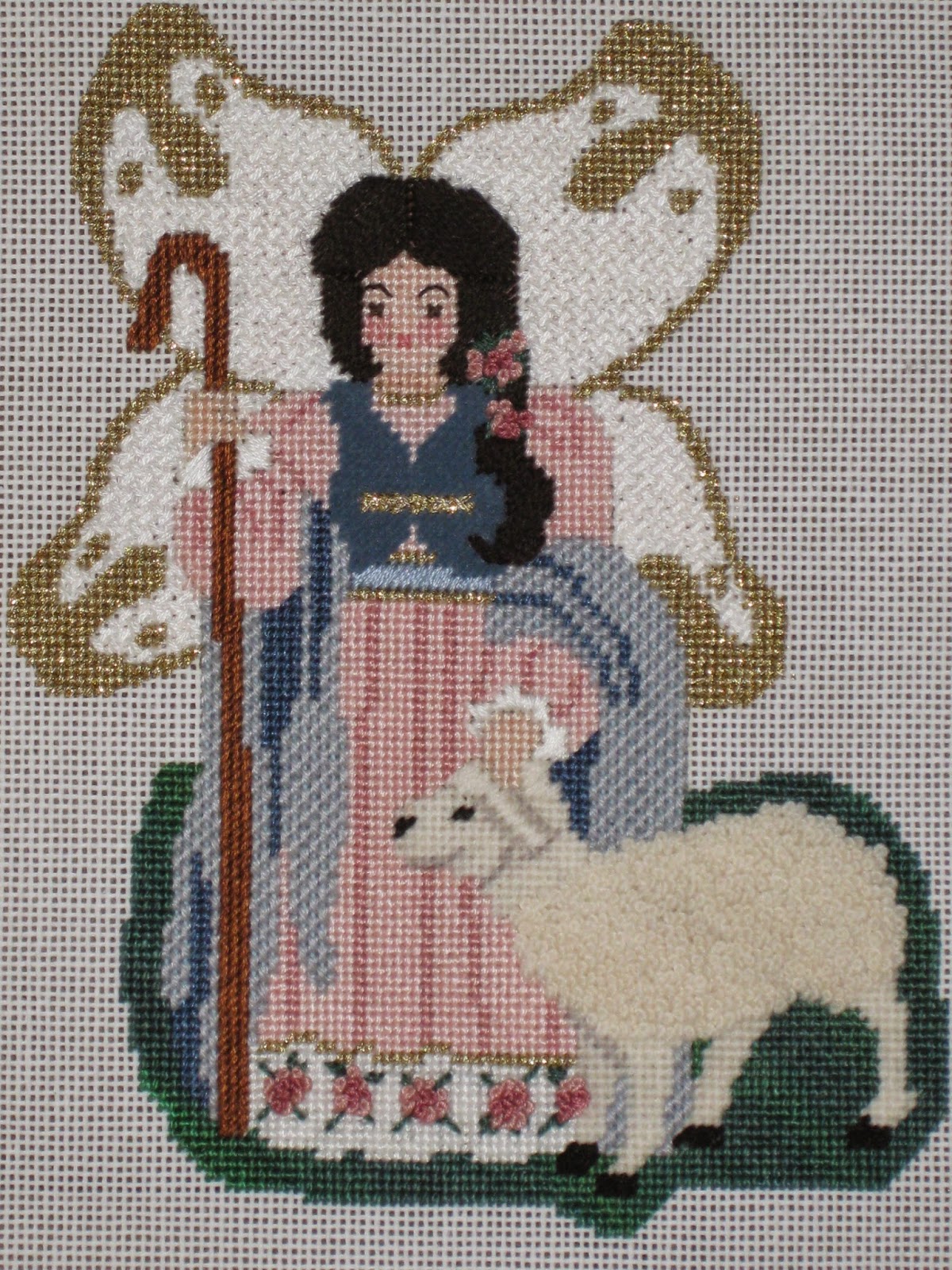 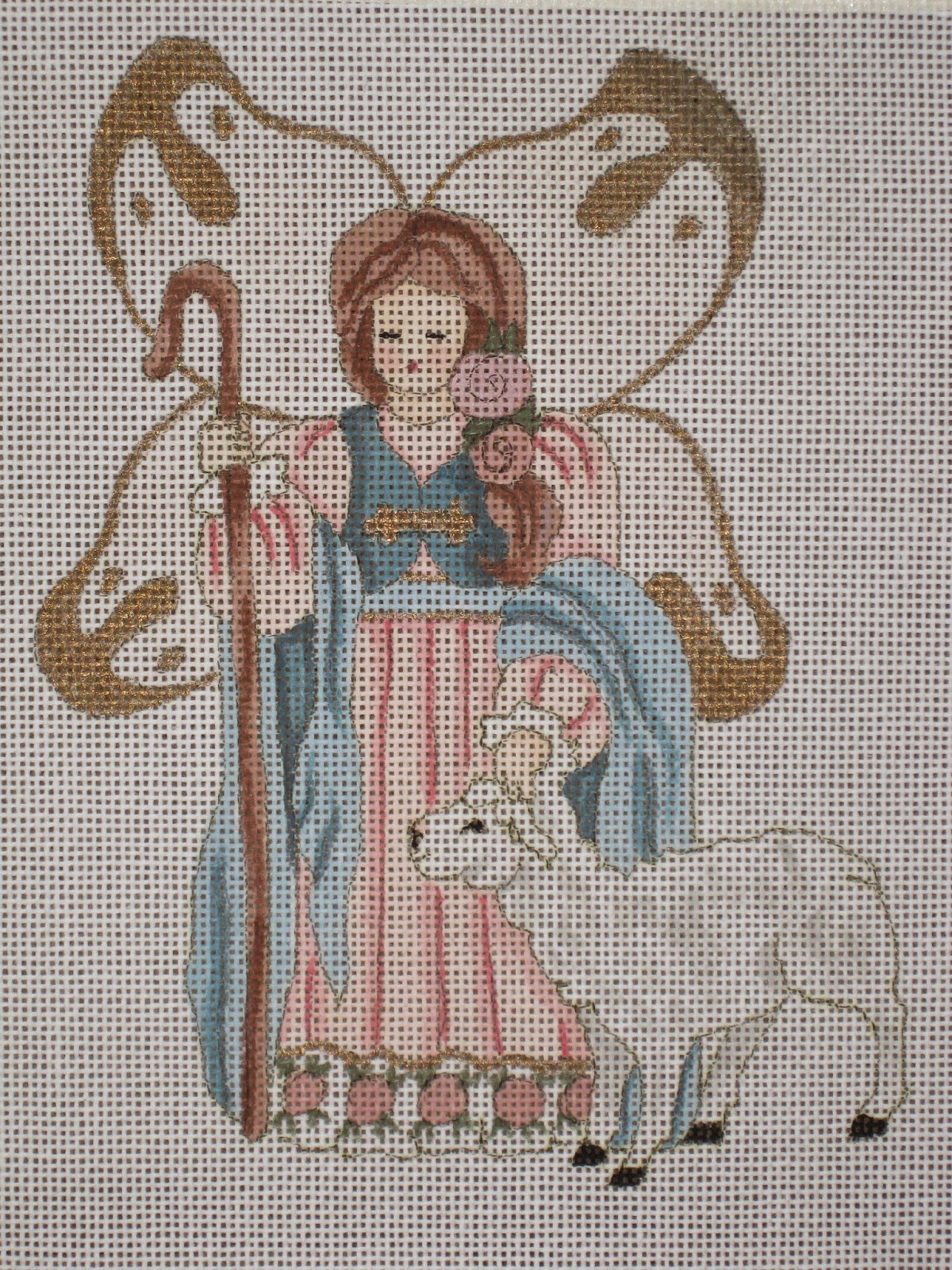 A hairdo and a hem 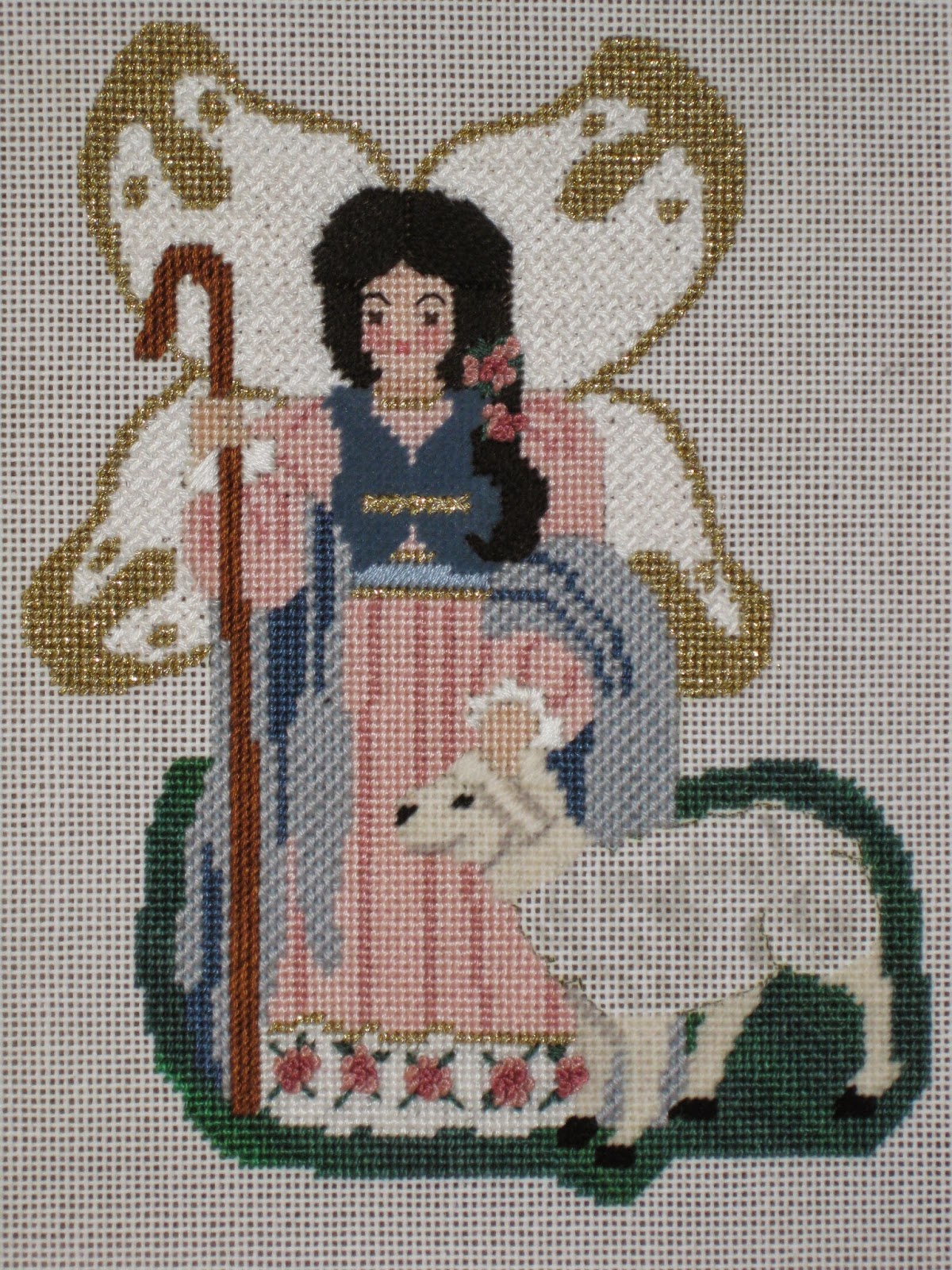 Fleece Fairy finally has hair, worked in a satin stitch with two strands of vintage DMC Medici wool.  To minimize the original flowers, I extended the hair down the side of her face and at shoulder level.  One strand of Medici wool formed her eyebrows with eyes worked in cross stitches with DMC floss.

The flowers in her hair and at the hem were stitched in French knots with two shades of pink DMC floss, with tent stitch leaves of Impressions.  At this point, she reminds me of Marie Antoinette pretending to be a shepherdess!

Now to begin a French knot marathon to finish the lamb and the project itself!
Posted by Anne Stradal at 6:01 AM 2 comments: 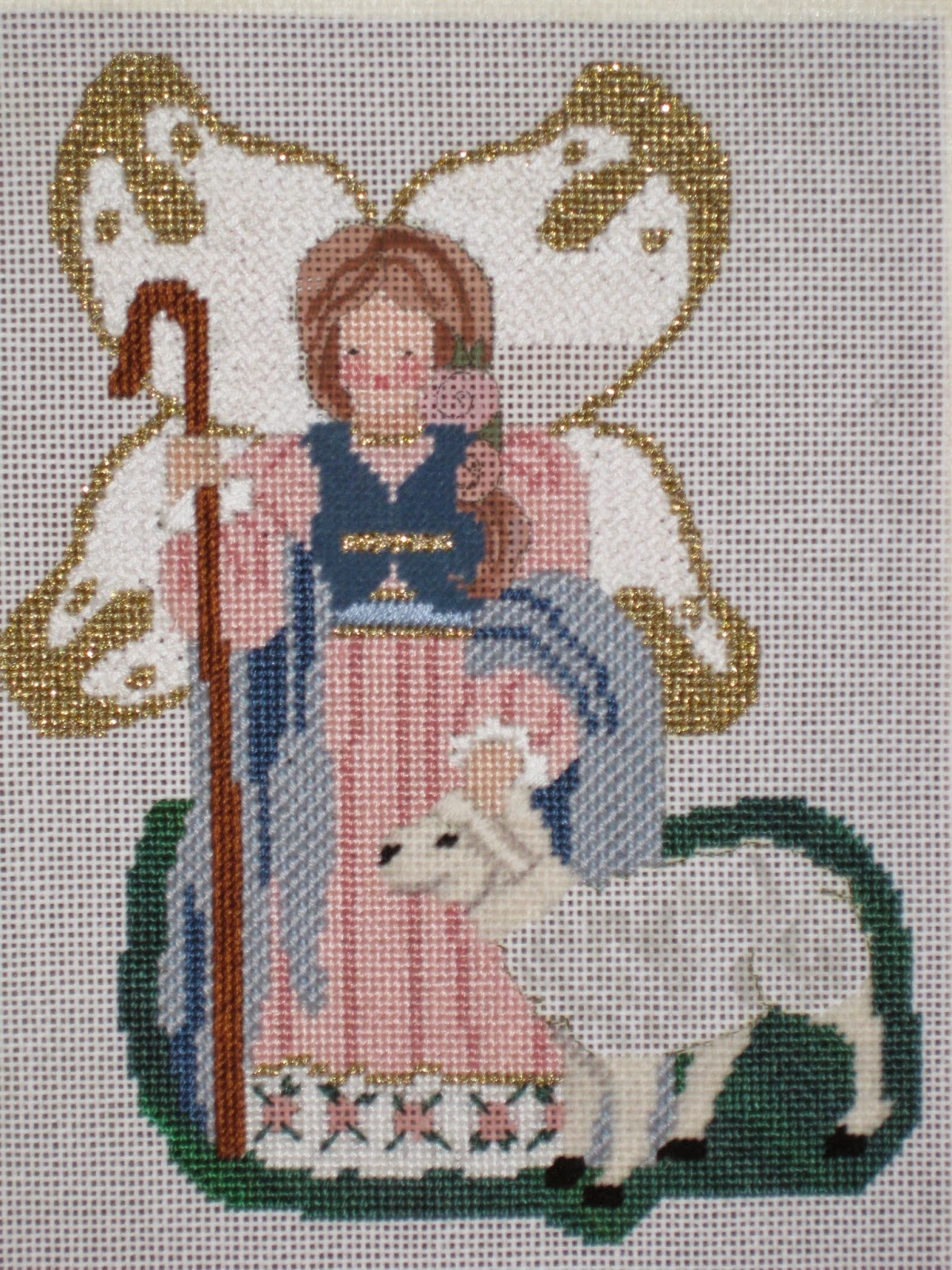 When you start stitching a painted canvas, how the piece will be finished is always foremost in your mind--it affects your choice of stitches and how much stitching you'll actually be doing.  Fleece Fairy was no exception:  the legs of the lamb, not to mention its wooly coat, would create a nightmare for a finisher trying to contour the outline for an ornament.

While I really wanted this piece to be an ornament, I considered other alternatives.  Sue Dulle (www.sudukc.wordpress.com) had suggested stitching a background for the figure and finishing it as a stand-up or as an easel, but the narrow margins around the design area made those alternatives prohibitive.  There are only eight canvas threads from the tail of the lamb to the tape on the right edge of the canvas and even less at the top above the fairy's wings.

While working away at the rest of the canvas, I finally arrived at a solution:  stitch a small area of background behind the lamb so the finisher wouldn't need to wrestle with its legs or the French knots that will create most of its body.  I carefully outlined the area, extending it on the left side as well to balance the design, and stitched it in basketweave with Watercolours "Emerald," a thread just heavy enough to cover unpainted canvas.  The background stitching will also make the finisher's job easier at the uneven edge of the hem on the fairy's dress, which I had worked in DMC cotton floss.  The head and legs of the lamb were stitched with vintage DMC Medici wool and the hooves with black Petite Very Velvet.
Posted by Anne Stradal at 6:20 AM 1 comment: 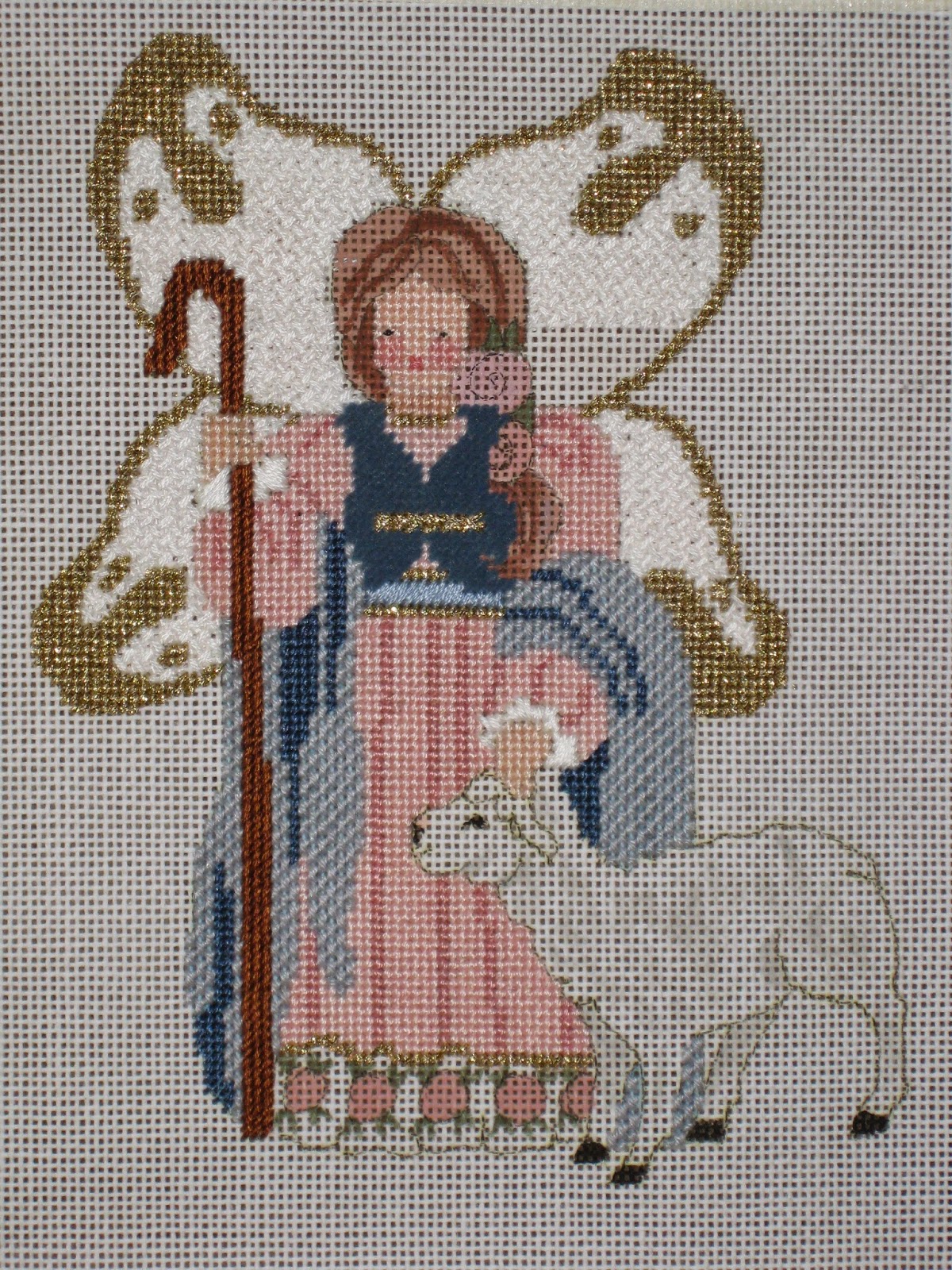 Continuing with Fleece Fairy's clothing, I added a closure for her bolero with Kreinik #12 tapestry braid #002 in a braided knitting stitch.  Tent stitches in this metallic edge her belt, worked in slanted Gobelin stitches with DMC cotton floss, and above the ruffled hem of her dress.

On to her shawl, worked in a diagonal oblong cross stitch with light blue Impressions.  I didn't have a darker blue Impressions for the shadows, so I substituted Felicity's Garden "Blueberry," which is essentially the same weight as Impressions.

Her staff was worked in an interlocking/encroaching Gobelin stitch using two strands each of DMC floss #433 and 434 blended together.

With stitching on a canvas for my next Needlepoint Now column almost complete, I hope to have more time to work on Fleece Fairy.
Posted by Anne Stradal at 5:50 AM 1 comment: