Readying for the Fourth/Ducking a Hurricane 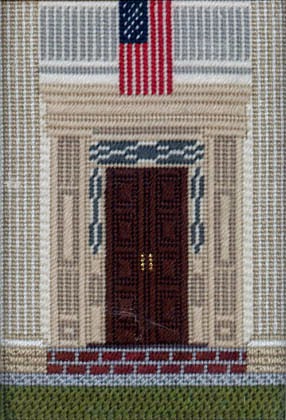 Arthur, the first hurricane of the 2014 season, has caused a few changes in plans along the Eastern coastline.  Tonight the Boston Pops will hold its annual Fourth of July concert on the Esplanade a night early, due to heavy rains scheduled for tomorrow.  So I decided to bump my celebration, too, in case heavy winds leave me with no power to blog on The Day.

Flying our flag proudly is The Hermitage in Nashville, TN, a design from the Doorways to the Past series.  It was the home of Andrew Jackson, seventh president of the United States.  Friends of ours from Texas--native-born Canadians, no less--took a family vacation there several years ago over July 4 and brought me back a great photo, which I adapted to needlepoint.

The only unclear detail in the photo was the doorway itself--was it painted or stained,  and what did the door handles look like?  I got my answers when I called The Hermitage and talked to a lovely lady at the reception desk!
Posted by Anne Stradal at 4:26 PM 1 comment: