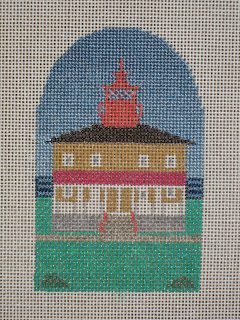 I began stitching on the Point Lookout lighthouse with the sky, which I wanted to be in keeping with a haunted lighthouse. I chose a gray-blue color palette of DMC cotton floss, starting at the top with four plies of DMC #932 stitched in basketweave. Randomly staggering the stitches at the bottom of each section, I followed this " recipe" down to the horizon:

I then added the water, using DMC floss #931 in a gobelin stitch over two threads. It was then time to work on the lighthouse itself, so I hopped on the computer to check the exact shade of red for the lantern room and tower. Some photos I hadn't seen before came up in my search, and I realized the roof of the house itself wasn't black: it was a red so dark that, in most of the previous photos I'd consulted, it had appeared to be black. Not to worry--I'll cover over that black paint with dark red when I get to the roof. I knew there was a good reason for my not painting a master for a lighthouse design until the model had been stitched!

In my previous post, I mentioned the study of ghostly activity, commissioned by the Maryland Committee on Psychic Research in 1980, which produced tape recordings of 24 different voices within the lighthouse. One of those voices, which distinctly utters the words "My home," has been attributed to Ann Davis, wife of the first keeper James Davis. When he suddenly died only two months after his appointment in 1830, Ann took over his responsibilities until her death in 1847. Her apparition, dressed in a long blue skirt and starched white blouse, at the top of the lantern room stairs has been documented by several people.

From 1971 to 1972, a young state employee, along with her husband and infant son, lived at the lighthouse. Each night she tucked the baby in for the night with his head at the top of the crib and, on one particularly chilly evening, clipped a blanket and top sheet down around the sleeping child. Halfway down the stairs to rejoin her husband, she heard the baby utter a blood-curdling scream. When she raced back to the bedroom, the child was sound asleep--at the other end of the crib, facing the opposite direction. His covers had been removed and the bed re-made so he'd still be snug in this new position.

Was it the benevolent ghost of former keeper Ann Davis who had taken it upon herself to rearrange the child? More stitching and more stories still to come!
Posted by Anne Stradal at 8:31 AM

YIKES! I love these stories - keep them coming, along with pics of your stitching. I think that red roof will liven up the gloom of that light house.

I'm loving this one!