In for a penny, in for a pound 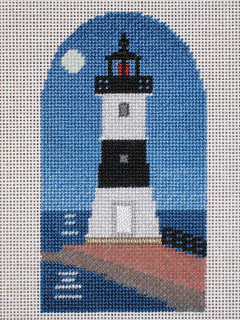 Two factors influenced my decision on how to stitch the water for the Presque Isle North Pierhead lighthouse. The reflection of the moon on the water appears only on the left side, in single lines, making the use of a decorative stitch to indicate movement next to impossible to compensate. Whatever stitch I used for the left side would have to be the same on the right, and in addition provide the illusion of depth to the water. My solution: to needle-blend the water, just as I had for the sky, and solve both problems at the same time!

The reflection of the moon on the water was added in tent stitches with Kreinik #12 tapestry braid #032. All that remains to be stitched is the pier itself, which I should be able to complete by the end of the week!
Posted by Anne Stradal at 6:01 AM

This gives me a feeling of peace - looking at the sky, moon, and reflection on the water. It's really pretty. I was wondering how you would make it wonderful without any foliage - but you did!! The Kreinik 032 is, indeed, a thread for all seasons. I need to get it in a big cone.

I love the night sky. Beautiful reflection in the water as well. This is a wonderful addition to your lighthouse collection! Waiting for the finish now.

This is my favorite, of all your lighthouses. I love the moonlight on the water, and I agree with Judy.. very peaceful.