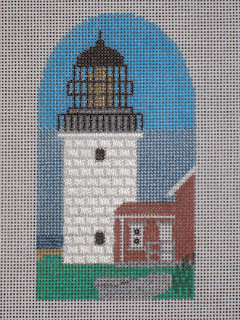 First up in stitching the Seguin Island lighthouse canvas were the granite blocks of the tower. These were worked with white DMC #5 perle cotton, with a row of slanted gobelin stitches over two threads under the lantern room and a Scotch stitch variation three threads high and four threads wide for the blocks themselves.

Since Seguin Island is one of the foggiest spots in the world, I couldn't pass up the opportunity to needle-blend a foggy sky! I'm using a Wedgwood blue color family of DMC floss here, unlike the "true blues" I normally use for a sunny sky.

Turning my canvas upside-down, I began at the horizon with the water. This was worked with three strands of DMC floss #931 in a horizontal interlocking gobelin stitch to give the subtle indication of movement in a very small area.

Now for the spooky story of the day!
In the late 1800s, a lighthouse keeper brought his bride to the island, where she became despondent because of the isolation. To cheer her up, he ordered a piano to be delivered to the keeper's house--no mean feat, since it had to be hauled a quarter mile up to the house over steep terrain. The bride required sheet music, but only one song had arrived with the piano. So she played that one song, over and over, much to the keeper's chagrin.

He ordered more sheet music, but when it arrived she ignored it in favor of the original song.
Finally driven into a mad rage, the keeper took an axe to the piano, his bride and himself. But to this day, it's said the faint tinkling of piano music can be heard across the waters surrounding the island.
Posted by Anne Stradal at 6:00 AM