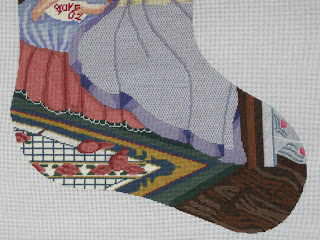 I started stitching this stocking using scroll bars, moving up and down as threads became available.  I skipped over areas that would get French knots eventually and finally made my way to the bottom of the stocking.  As it appears here, the canvas has been transferred to stretcher bars so I could reach the toe of the stocking.

The bed skirt was worked in an encroaching Gobelin stitch with three values of rose Impressions and trimmed with white DMC #8 pearl cotton.  The letter to Santa was stitched in basketweave and tent stitches with DMC floss;  more floss in basketweave created the fitted bottom sheet.

The rug was also stitched in basketweave with various shades of Impressions, with the exception of the "Old Gold" Sheep's Silk .

The edging of the comforter was created in an encroaching Gobelin stitch with Vineyard Silk Classic using three values of lavender.  The body of the comforter was worked in Nobuko stitch with Vineyard Silk Classic "Illusions."  With the canvas turned upside down, I worked my way to where it was stapled to the stretcher bars.  Time to move the canvas on the stretcher bars once again so I can reach the middle of the stocking!

I always love your blog stitching! I'm glad you are back. Where are the French knots going to go?

Trim for Santa's hat and cuffs. Not decided on the little girl's hair yet.